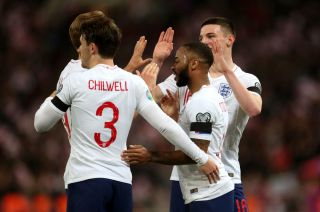 Gareth Southgate heaped praised on “devastating” Raheem Sterling after his hat-trick helped England kick off Euro 2020 qualification with a comprehensive win against the Czech Republic.

Last year’s World Cup semi-finalists have the inaugural Nations League Finals to look forward to this summer and 2019 started off on the right foot at a sold-out Wembley on Friday.

Sterling netted his first treble for England and earned the penalty that saw Harry Kane score the second goal, with a shot from 18-year-old debutant Callum Hudson-Odoi leading to Czech defender Tomas Kalas’ own goal as the match ended 5-0.

Jadon Sancho made his first competitive start and newly-eligible Declan Rice made his debut on a memorable night, but one man dominated the talk after Friday’s Group A opener.

“I saw what I’ve seen all week from him, so the level he hit didn’t surprise me,” manager Southgate said of Sterling.

“He’s in a really confident moment, not only on the field, but off the field he’s so mature and comfortable in himself.

“I think I talked about that earlier in the week, really, how I’ve seen that.

A hattrick for the brilliant @sterling7. What a marvellous footballer he’s become. 👏👏— Gary Lineker (@GaryLineker) March 22, 2019

“So I’m delighted for him to get the reaction that he did from the crowd here.

“We can’t hide from the fact that he’s had difficult moments with England and he’s turned that full circle.

“I also think the goals in Spain were an important moment for him. You could see the release that had brought.

“And his finishes there and tonight were finishes that he was just taking on without thinking too much.

“At times, you could almost see the thought process in the past, but he’s hungry for those goals.

“I know he’s spoken about that before, of how he’s added that incentive to his game and I thought he was devastating tonight.”

Sterling wrapped up his hat-trick with a deflected effort on an evening that started with him scoring at the end of a 25-pass move.

The Manchester City forward celebrated his second by revealing a T-shirt paying tribute to 13-year-old Damary Dawkins, who died on Sunday after a battle with leukaemia.

Special night in so many ways ☝🏾✨ RIP Damary, gone but u will never be forgotten. ❤️ pic.twitter.com/AIJ0YVi5SY— Raheem Sterling (@sterling7) March 22, 2019

“I’ve put him into the leadership group that we have,” Southgate said of Sterling.

“I think he’s showing those signs, I think he’s a role model for the younger players coming in.

“He’s really focused on his training and his preparation and I think he’s enjoyed that extra responsibility as well.”

The only setback on a comfortable night for England was the hip injury that forced off Eric Dier and rules him out of Monday’s trip to Montenegro.

But despite scoring five goals and keeping a clean sheet, Southgate was not completely happy.

“I thought we were a little slow at the start to move the ball, and there was a period at the beginning of the second half where we lost a bit of tactical discipline and conceded chances that on another night would be punished,” the England boss said.

“But that aside I really liked the way we pressed the ball quickly, won the ball back quickly and our use of the ball was very good.

“We were patient at the right times, played forward with quality and some of our attacking play and forward runs were really exciting.

“And so, I’m nit-picking, but I think we can get better and I think we’ve got to keep doing that because these guys have got the potential to play at an even higher level than they did tonight, I think.”

Czech counterpart Jaroslav Silhavy had no arguments about the outcome at Wembley, although the scoreline understandably stung.

“I would like to congratulate our opponent today,” he said. “They are obviously a very high-quality, strong team.

“Five goals was a little bit cruel for us. I think although we lost those five goals, our boys tried very hard the whole game.”