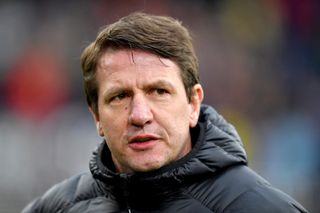 Instead, Stendel hailed his goalkeeper Adam Davies after his “excellent” performance helped Barnsley snatch a hard-fought victory that keeps them into the top two of Sky Bet League One.

Woodrow, whose tweet was later deleted, claimed the incident left German coach Stendel with “blood pouring from his face”. Barton said on Friday he “emphatically” denies all allegations.

Stendel preferred not to comment on the subject on Friday as he focused on a valuable victory over Shrewsbury, who he admitted were the better side on the day.

He said: “We won the game because we scored twice, one more than Shrewsbury and because we have the best goalkeeper in League One. I think that’s the biggest reason we won today. He (Davies) was excellent today.”

“It was a tough game like the reverse fixture in Shrewsbury – it was very physical. Shrewsbury caused us a lot of problems, they had three or four big chances to win the game, they were better today but I’m happy with the result.

“I’m very happy about the reception from a lot of the supporters in the last week and today.

“We want to keep gaining points, we want nine points from the last three games and we will see what happens. It’s good for us to win this game but we need more points.”

The Shrews had a great early chance when Shaun Whalley went through on goal, but the initial shot was saved by Davies before his follow-up effort was cleared off the line by Adam Jackson.

Alex Mowatt provided the breakthrough 23 minutes in with a brilliant solo effort. He collected the ball 25 yards out, weaved into space and released a stunning, curling effort past Jonathan Mitchell.

The visitors replied with a great goal themselves when Tyrese Campbell latched onto a loose ball and fired a fierce volley into the bottom corner in the 38th minute.

Cameron McGeehan rattled the bar moments as the Tykes looked to retake the lead at the start of the second half, and they netted what would prove to be the winner in the 55th minute when Jacob Brown smashed home from Mike Bahre’s pass.

Shrewsbury manager Sam Ricketts was delighted with his side’s performance despite falling to a narrow defeat which leaves them five points above the relegation zone.

Ricketts said: “I think the quality of chances we had today is the best we’ve had. I can’t quite remember a game where we’ve had such good chances.

“The performance was outstanding, we came to a team who are rightly towards the top of the table pushing for promotion but ultimately I think we controlled the game with our chances.

“We didn’t come here to shut up shop and nick a chance. We were generating chances throughout the whole game. Everything worked, our game plan worked exactly how we wanted it to.

“You can’t ask for anymore in that respect, what I can ask for more is to win the game. We have to score when we get those chances, if you want to be a good side you take those chances. Equally at the other end, we must defend well.

“But ultimately, on a performance level, it’s as good as I’ve seen this season.”