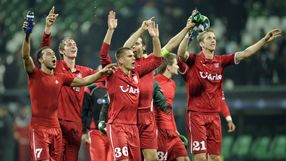 Leen van Steensel had put Excelsior ahead after two minutes but Nacer Chadli, who scored the only goal against PSV Eindhoven last weekend and got the first in a 2-0 Champions League win at Werder Bremen on Tuesday, equalised before the break.

Janko got the winner after being set up by Denny Landzaat.

Twente are top with 31 points after 13 matches, four ahead of PSV and Ajax Amsterdam, who visit Utrecht and host ADO Den Haag respectively in their weekend matches on Sunday.

Groningen remain fourth with 27 points after a 2-1 home win over NAC Breda with Andreas Granqvist scoring all the goals. The Swede put the ball into his own net after two minutes but made amends by converting two first-half penalties.

An own goal by Heracles Almelo defender Birger Maertens in added time handed Heerenveen a 3-2 home victory after they had thrown away a two-goal lead late in the second half.