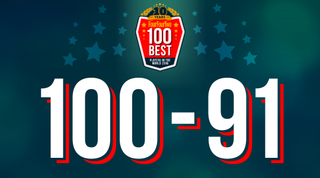 Welcome, welcome to the 10th edition of the Top 100! Kick off our rundown of the finest players on the planet with the first batch: including a teenage sensation, vital midfield powerhouses and even a Manchester United player…

Find our hub of players, features, videos and more here.

When FFT’s Top 100 list for 2015 was released this time last year, Dembele had appeared in a grand total of three first-team matches since turning professional at Rennes; the fact that the teenager has made the cut this time around is therefore testament to the remarkable progress he’s made in the last 12 months.

A return of 10 goals in 19 Ligue 1 appearances in the first half of 2016 helped Rennes to an 8th-place finish in Ligue 1 and earned the 19-year-old Frenchman a five-year contract with Borussia Dortmund, who reportedly paid €15m to bring the talented forward to Signal Iduna Park. Dembele has featured in 11 of the 12 Bundesliga encounters BVB have contested this season at the time of writing, while he’s also been a regular starter in the Champions League, causing problems for European as well as domestic full-backs with his speed, trickery and direct dribbling. – GL

It was obvious to everyone why Jose Mourinho didn’t want Cech hopping across London to Arsenal in the summer of 2015 – but even he, like Roman Abramovich who’d promised the Czech his move, knew that the Blues’ long-serving goalkeeper of 11 years didn’t deserve to rot on the bench.

Unsurprisingly, the now-34-year-old has proved just why Arsenal fans were so thrilled to sign him after a typically reliable debut campaign in which he kept the most clean sheets of any Premier League goalkeeper (16), saved the third-most shots overall and had a higher save percentage than anyone else (76%) – including from shots within the box (72%). The Gunners may have fallen flat in the title race as soon as late-February, but their shortcomings were hardly Cech’s fault.

His Euro 2016 was disastrous – Czech Republic lost two of their three group games and finished bottom – and Cech promptly retired from international football after the tournament as his country’s all-time caps holder (121). He's still a class act, though – on and off the pitch. – JB

Matuidi may have added another Ligue 1 winner’s medal to his collection with PSG – the fourth of his career – and appeared in all seven of France’s matches at Euro 2016, but the all-action midfielder hasn’t had everything his own way in 2016. The 29-year-old struggled at times during the Euros, with many Bleus supporters calling for him to be dropped from the hosts’ starting line-up, while he’s also been in and out of the PSG team under new boss Unai Emery this season.

Nevertheless, Matuidi remains one of European football’s most complete midfield players, boasting an excellent blend of technical and physical qualities. It’s also worth bearing in mind that the ex-Saint-Etienne star's occasional benching this term is probably a result of Emery’s desire to grant him greater rest periods rather than a reflection of his showings at club level. – GL

For Eredivisie followers, it's baffling that Ziyech hasn't received more attention and praise: the 23-year-old has been the best player in the Dutch top flight for the last two years. On his slim shoulders he carried an underperforming Twente – with the KNVB investigating them for the Doyen controversy and relegation looming – and guided them to safety. Ziyech's goals counted for 35 per cent of Twente’s overall total and he was the reference point around whom the whole team functioned.

Many foreign clubs showed some interest in the summer but none made a definitive move, so when Ziyech was the subject of a late bid from Ajax, he made the move – a step up, even if a small one. Not renowned for his stamina, the Moroccan has adapted commendably to the high-intensity football Peter Bosz prefers, and has established himself as the kind of influential figure he was at Twente, even among better team-mates. Defences tend to play deeper against Ajax than he's used to, but this has posed little problem for Ziyech, whose prolific creativity puts him among the elite in terms of numbers.

The likes of Dortmund and Wolfsburg will be back should he maintain his impressive form, while even bigger teams may begin to turn their heads towards the svelte playmaker. – PR

Next: Banished by Chelsea, brilliant elsewhere

Equally effective in the centre or on the right, the ever-elegant Mario blossomed into the magnificent footballer Sporting’s coaches always believed he would become in 2016. Combining intelligence, faultless technique and a tireless work-rate, Mario was the driving force behind Sporting’s strongest tilt at the Portuguese title for 15 years – the Lisbon club broke its points record, only to be pipped at the post by Benfica.

Mario’s frustration at missing out on silverware at club level was offset by playing a major role in his country’s historic Euro 2016 triumph. The midfielder featured in each of Portugal’s seven matches, saving his best until last with a superb display in the final as the Seleção stunned the hosts at the Stade de France.

A lucrative move to Inter followed, where the 23-year-old has stood out as one of the few bright spots in the Italian club's turbulent start to the season. – TK

Know this, chuckling Chelsea fans and parochial English cynics: in 2016, Salah has scored or assisted 27 goals in 34 Serie A games for Roma. As a winger in a traditionally defensive league, that’s some ratio.

Many Brits know Salah only for unexpectedly rocking up at Stamford Bridge aged 21, having scored in Basel’s two Champions League wins over Chelsea. Foreshadowing his signing of Juan Cuadrado – whose arrival, incidentally, saw Salah loaned to Fiorentina in exchange – Jose Mourinho then had immediate buyer’s remorse and decided to pretend Salah didn’t exist.

Even when we lauded Salah at No.100 last year, it was more in hope than expectation. However, he’s only improved since, adding a consistent goal threat to his direct dribbling game. He’s also shooting for Russia 2018: two early wins, Salah scoring in each, have put Egypt in a great position to reach only their second post-war World Cup ahead of serial attendees Ghana. – H. Davies

His transfer might not have generated as many headlines as moves involving Paul Pogba, Gonzalo Higuain or Mats Hummels, but Banega had as strong a claim as anyone to be recognised as the summer’s finest signing when the window closed at the end of August.

After starring in Sevilla’s third consecutive Europa League success – the Argentine ran rings around Liverpool in the final – Inter secured the string-puller’s signature without paying a penny when his contract at the Ramon Sanchez Pizjuan expired. He’s had a mixed start to his career at San Siro, though, starring on some occasions but struggling on others, and was dropped by new boss Stefano Pioli for November’s derby draw with Milan.

As a wonderfully creative player who’s capable of dictating his team’s tempo and feeding attacking team-mates in dangerous positions, it surely won’t be long before Banega is bossing Serie A midfields. – GL

Next: Age is just a number

Looking back now, it's incredible to think that the 32-year-old goal machine was picked up on a free by Benfica to little fanfare back in summer 2014. After 31 goals in his debut season, he managed to better that total with 36 strikes in all competitions in the following campaign.

His prolific scoring played a huge role in propelling Benfica to another title, but the silky-skilled Brazilian brings far more than just goals to the table. Astute positional awareness allied to a wonderful touch makes him a strike partner any centre-forward would love to play with, as attested by the abundance of goals netted by compatriot Lima and Greek marksman Kostas Mitroglou while playing alongside him.

Jonas was deservedly named Primeira Liga Player of the Year in 2015/16, with a call-up for Brazil capping a remarkable renaissance for a player who seemed finished when he was released by Valencia two years ago. – TK

"One of the most underrated players in the Premier League," so says Sky Sports pundit Jamie Carragher of Manchester United's Mata.

The 28-year-old’s Old Trafford future was cast into serious doubt when the boss who booted him out of Stamford Bridge turned up this summer. How times change: the Spaniard is now flourishing as a regular under Jose Mourinho, with his efforts at club level leading to an international recall after missing out on Euro 2016.

Mourinho sold him once, but he’d be foolish to do so again; despite the inconsistencies of post-Ferguson United, Mata continues to contribute when it matters most. He's scored 10 goals in 2016, three coming in just four appearances in their triumphant FA Cup campaign last season, including the equaliser in the final. He's also undoubtedly a big game player: in his 43 appearances against the ‘Big Six’ since 2011 he's scored 13 times and contributed 10 assists.

Fans of the German national team have their fair share of gifted young players to get excited about, but Bayer Leverkusen’s 20-year-old winger is one of the most talented members of the next generation.

The blond, Bremen-born Brandt became the youngest player since Gerd Muller (who else?) to score in six consecutive Bundesliga games when he scored against Stuttgart, Wolfsburg, Cologne, Eintracht Frankfurt, Schalke and Hertha Berlin in March and April, while his performances throughout the year had him nominated for the Golden Boy award won by Renato Sanches.

Brandt is the perfect player for Roger Schmidt’s high-intensity style of play: a strong runner who’s most dangerous when cutting infield from the left flank onto his right foot, the four-time Germany international possesses terrific technique and creativity in abundance. – GL