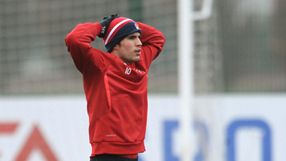 Arsenal take a 2-1 lead into the second leg of the tie at the Nou Camp and Van Persie was expected to miss the game with a knee injury sustained in last week's League Cup Final that Wenger said wuld rule him out for at least three weeks.

However, he trained on Monday before the squad flew to the Catalan capital and was included in a 19-man squad, which will be trimmed to 18 before the match.

He will be assessed by medical staff on Tuesday morning, Wenger told a news conference at Barcelona's Nou Camp stadium, although he stressed that he was not prepared to risk playing the Dutch striker if he was not properly fit.

"He has made quick progress in the last few days," Wenger said. "He had a test this morning and it was quite positive. We'll see how he responds to that and I'll make my decision tomorrow.

LIVE COVERAGEFollow it with the FourFourTwo team as it happens

"Of course we'll not take a gamble in a game of that importance. He'll really have to be fit. It's no mind game. The medical staff will assess him. I would like him to play if possible but we will only play him if he is 100 percent fit.

Captain Fabregas has been fighting to overcome a hamstring injury but Wenger said he expected his captain to recover.

"It is vital for us because he is important in the transition between attacking and defending," Wenger told the club's website earlier on Monday.

Appearing at the news conference with Wenger in Barcelona, where he was a youth player before joining Arsenal, Fabregas said he and his team mates had been surprised Van Persie had joined them on the flight.

"Robin is a very, very important player for us because he is the complete striker," he said. "He gives you all the options that you need."

On his own physical state, Fabregas said: "My fitness is good. For the last six days I haven't felt anything. I prefer to be safe and I know that I am good if selected to play and that's it. That's the reality."

Fabregas and Van Persie missed the Nou Camp second leg of the team's quarter-final last season when the Spaniards triumphed 4-1 to go through 6-3 on aggregate.

Wenger said midfielder Jack Wilshere, who turned an ankle in Saturday's goalless draw with Sunderland, would be able to play but Alex Song had been ruled out with a knee injury. Winger Theo Walcott will also miss the game with an ankle injury.