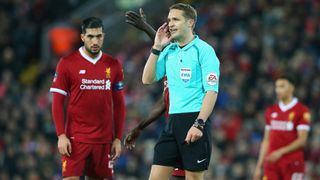 VAR was used to disallow a goal in English football for the first time on Saturday in Liverpool's FA Cup clash with West Brom.

The visitors were leading 2-1 at Anfield when Craig Dawson thought he had scored his side's third with a header 19 minutes into the contest.

However, the video assistant referee was consulted and the goal eventually ruled out, apparently because Gareth Barry was standing in an offside position when he tried to help Dawson's header into the net.

Two minutes later, VAR gave Liverpool the chance to equalise, with referee Craig Pawson awarding a penalty to Mohamed Salah after consulting the touchline screen after a review and penalising Jake Livermore for pulling his shirt.

Roberto Firmino, who opened the scoring before two goals from Jay Rodriguez put West Brom ahead, took the spot-kick but crashed his effort off the crossbar.