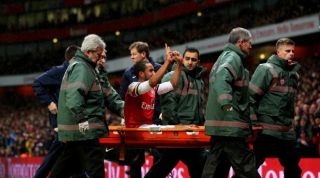 After suffering a knee injury late in Arsenal's FA Cup third-round victory at the Emirates Stadium, the England international signalled the scoreline of 2-0 to away supporters as he was carried past them on a stretcher.

In a statement on Monday, the FA confirmed Walcott would not be punished, but reminded the player of his responsibilities.

Arsenal and Tottenham have been asked for their observations by the FA after objects were thrown from home and away sections of the crowd during the match.

Arsene Wenger, the Arsenal manager, revealed Walcott had been pelted with coins prior to his gesture, yet the actions of both sets of supporters are being scrutinised.

The statement from English football's governing body read: "The FA has contacted both Arsenal and Tottenham to seek their observations in relation to objects being thrown from both a home and away section of the crowd at different times during Saturday's FA Cup tie.

"The FA condemns any such acts and will liaise with both clubs and the Metropolitan Police to identify those responsible and support the strongest sanctions available, including life bans.

"Meanwhile, in relation to the same fixture, The FA has contacted Arsenal’s Theo Walcott and reminded him of his responsibilities regarding a 'scoreline' gesture he made in front of away supporters during the game.

"The FA will not be taking any further disciplinary action."