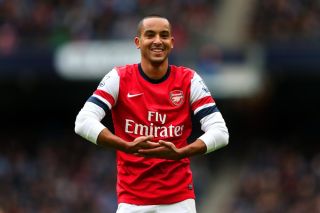 It has been nine years since Arsene Wenger's men last collected silverware, that too coming in the FA Cup in a penalty shootout victory over Manchester United in the 2005 final.

Arsenal have the opportunity to end that drought when they meet Hull City in this year's final on May 17 and Walcott thinks victory could spark a new era at the Emirates Stadium.

"If we win the FA Cup, which we have a great chance to do with the way we are playing, the players are going to want more trophies," he told the club's official website.

"I think the first one is so important - once you win that, you'll win more and more. I'm pretty sure of that.

"It would be great for the boss to win a trophy again, too.

"He's shown so much belief in us throughout the years. If we don't play well, he always reflects it back on him, even though it’s our job to go out there each week and try to perform.

"That just shows how much faith he has in us all and it's really important to him. The years just before I arrived here were unbelievable and he wants that again."

Arsenal had been in contention to lift the Premier League title this campaign, but high-profile defeats to the likes of Chelsea and Liverpool saw Wenger's men slip out of the picture.

Walcott has not featured since January after rupturing his anterior cruciate ligament against Tottenham, but the England international believes injuries to the likes of Aaron Ramsey, Jack Wilshere and Mesut Ozil have proved equally damaging to the club's ambitions.

He added: "Losing Aaron and then Mesut and Jack soon afterwards, the boss admitted it was difficult for us to cope. If you take three main players out of a team, it's going to affect you.

"It was sad for everyone to get injured around the same time but you deal with that as a squad. You want to try and keep your main players fit and sadly we couldn't."