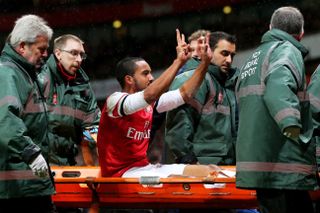 After suffering a knee injury late in Arsenal's FA Cup third-round victory at the Emirates Stadium, the England international signalled the scoreline of 2-0 to away supporters as he was carried past them on a stretcher.

Members of Arsenal's medical staff revealed to Wenger that Walcott's reaction was prompted by Tottenham fans throwing coins at him.

The Frenchman defended the former Southampton man and is not envisaging the Football Association taking any action against him, with the incident coming a month after midfielder Jack Wilshere was handed a two-match ban for aiming a gesture towards Manchester City fans.

When asked if he thought Walcott will be punished, the Arsenal boss said: "I don't think so.

"My response will be simple, they have seen the pictures on television. If they judge it offensive, what can I say? I prefer they don't ban him and he is not injured.

"I have seen the pictures after the game and it does not even look aggressive, he is smiling.

"The doctors said to me that the coins had been raining over his head and they had to protect him, maybe that is why he did that.

"Yes (the coins came before the gesture) that is what I have been told. After that, what he did is not offensive.

"You look for every single incident, I can understand that, but it is an action that didn't offend anybody."