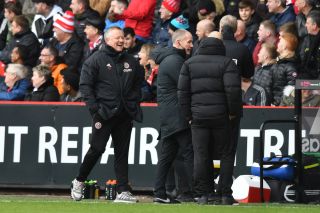 Chris Wilder was delighted to see Sheffield United had learned from their last game against Rotherham after Saturday’s 2-0 home win lifted them back into the automatic promotion places.

Jack O’Connell’s opener and Mark Duffy’s fifth goal of the season ensured a comfortable Sky Bet Championship victory for the Blades after Rotherham captain Will Vaulks was sent off in the first half.

The home side’s early pressure paid off as defender O’Connell opened the scoring in the fifth minute and the visitors’ task became considerably harder as Vaulks saw red in the 28th minute for a lunging challenge on George Baldock.

The Blades dominated the second half before Duffy doubled their advantage in the 74th minute by rifling an unstoppable shot into the top corner, making up for November’s dramatic 2-2 draw in Rotherham.

Wilder said: “They’re stubborn opposition so we prepared just as much as any other game this year.

“We’ve learned the lessons from what happened at the New York Stadium (where Jamie Proctor hit a stoppage-time equaliser for the Millers) because they were better than us on that day and outfought us.

“It was two different styles today, it’s back to front for them and it’s effective. They ask questions so I am delighted that we answered those questions defensively.

“We started the game in a tremendous fashion and obviously we got an early lead after a couple of good chances before then.

“It was difficult because they sat in and at times maybe we tried to be too precise but we were always looking to get a second goal.”

Wilder was also in no doubt over Vaulks’ dismissal, saying: “I think everybody at the time thought it was a red straight away.

“I don’t think there was any complaint from Paul (Warne) either. The boy has took off and lunged so it must be disappointing for them.”

Rotherham manager Warne said: “I knew they would start really strong and they did, they got the goal and it was a good finish but then I thought we were in the ascendancy.

“It took the handbrake off our lads, they were giving it a good go but obviously the sending-off is a massive turning point.

“We came out second with a bit more damage limitation but then they scored another great goal.

“The lads put in everything they’ve got, I’ve got no complaints at all and I’m proud to be their manager.

“Two-nil away from home doesn’t sound like a great result but goal difference is key for us. It could have ended up being a lot more so overall I’ve had better days but I’ve had worse.”

Warne also had his say on Vaulks’ red card, adding: “We’re not a dirty team. I think Will is just really competitive, he plays with his heart on his sleeve and that’s why he is so good for us.

“I don’t think he has gone into the tackle with any intent to hurt the lad but obviously his exuberance meant it was a red.”