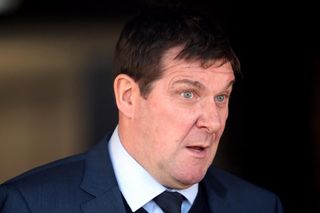 The Perth side are looking to finish top of the bottom six and they hold a three-point advantage over nearest challengers Motherwell in the race for seventh place.

But while the pressure is off Wright’s team heading into Saturday’s clash in Paisley, their Renfrewshire opponents are still battling for their Ladbrokes Premiership lives.

Oran Kearney’s side have a six-point cushion over basement boys Dundee but face the nail-biting prospect of a demotion play-off unless they can climb up from 11th.

“It’s an important game for both sides,” Wright told St Johnstone’s official website. “If we want to finish the season in seventh then it’s a game we have to be looking to win and likewise St Mirren will see it as an opportunity to almost guarantee that they won’t finish the season bottom.

“In terms of the bottom three at the moment I think St Mirren look like they’re in the best form. They’ve played three at the back for a while now and they’re difficult to break down.

“However we know we’re more than capable and we’ve proved that in the three games we’ve had against St Mirren this season already.”

Wright’s team picked up their third win in five games against Dundee last week and the Northern Irishman wants to see them continue their recent form.

He said: “I’m looking for a similar performance to the Dundee win last week. I want to see energy and I want us to be on the front foot having a real go.

“We all want to finish seventh so it’s important we keep focused and end the campaign strongly.

“We’ve had a really good season as I’ve said so many times over the recent weeks. Our points return after 33 games was very good but this season it just wasn’t enough to get top six.

“If we take the good things from last weekend’s performance into the match then I’m confident we can come away with the result tomorrow.”