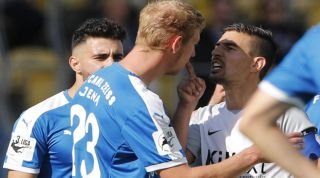 In the second half of Jena's 3. Liga clash against Meppen, the hosts' striker Julian Schmidt crashed to the floor after a nasty collision.

In the interests of good sportsmanship, Meppen's Nico Granatowski stopped play so Schmidt could receive treatment.

But, with his side 2-0 down, Eismann had no time for humility. Rather than accepting Meppen players' good grace, he stole the ball off striker Granatowski and ruthlessly fired a shot into the back of the net.

Meppen players were so enraged with Eismann that one even tried to rugby tackle him afterwards.

Eismann clearly couldn't care less about the backlash: he went on to score his second in the 82nd minute and secured a point for Jena.