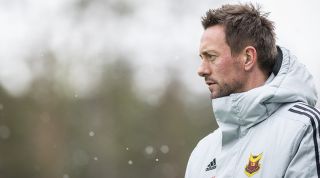 If there’s anyone who proves that there is more than one route to reach a destination, it’s Ian Burchnall.

The 37-year-old Leicester native had no major playing career to note before he took his first coaching job at the University of Leeds aged 22, but hard work, a fine brain and rapidly thickening contacts book soon took his career to unforeseen places – namely Norway and Sweden, where he was latterly managing Ostersund until his departure last month.

If Burchnall’s story suggests anything, it’s that there is no ‘right’ journey... only ‘different’.

“My playing career was nothing of note – lower non-league, semi-pro football. I played for the university when I was there and a couple of non-league clubs, but joined the coaching pathway quite early,” he tells FFT. “I wasn’t really loving playing in non-league – it wasn’t for me – and enjoyed the coaching much more.

“I just took a different route. So I went out to Norway as Brian Deane’s assistant manager when I was 29, having been in an academy environment [at Leeds and Bradford]. Brian came down to do a bit of coaching at the university while he was doing his badges, and we kind of clicked. We were at Sarpsborg for two years – they were newly promoted but we kept them up, then led them to 8th. We had a good run there.

“That was eight years ago now, and I think things have evolved quite a lot [in English football] with the emergence of people like Graham Potter coming from slightly different avenues. There seems to be more opportunities for coaches who have come from under-23 football, then making the progress to first teams.

“It was almost 10 years ago that I was in that situation but couldn’t really see what my path was – so I took a different one. Going abroad really does challenge you on many different levels – not only language and culture but also styles of football and learning different methods. It broadens your knowledge a lot.”

Indeed, it was Burchnall who succeeded Potter at Ostersund following the latter’s stunning work with the Swedish also-rans, after the duo had also met in Leeds. West Yorkshire was a hotbed for forging future connections that also include Liam Sutcliffe, head coach at ProChance. Sutcliffe’s project takes promising young players without a professional contract and aims to give them another opportunity to secure a future in football, using his contacts and strong support network to arrange regular showcase matches in front of key decision-makers.

Each of the hopefuls at ProChance have faced setbacks to reach their current position – but Burchnall knows from experience that such difficult episodes can in fact prove hugely constructive down the line.

“There are loads of setbacks in football, to be honest – and they continue to happen,” he explains. “I’ve failed on coaching badges and had to retake them. Going through that pathway, you often fail a lot – but I think it’s a good thing. You need to.

“When you’re doing your A-Licence, get a rejection and then have to go back and do it again, it feels bad at the time – but then you look back on it and think, ‘Actually, that was no bad thing’. Things shouldn’t be really easy and those challenges toughen you up.

“At Sarpsborg, we had some really challenging times – once, we lost six or seven in a row – and were fighting relegation, but then got out of it. At Ostersund the club had some off-field problems which they overcame last season, and the club kept their place in the Allsvenskan. Overcoming setbacks means you’re more prepared the next time something goes wrong, which can be quite regular in football.”

ProChance’s ultimate ambition is straightforward: working with promising players between 15 and 19 who are currently on the outside of the professional game, offering them another way in with invaluable opportunities they thought were lost outside of life in an academy. In December, they faced Huddersfield Town’s development squad, and plans are afoot for more showcase matches once it is safe for football to resume.

“It’s an interesting concept that looks to continue giving opportunities to players who otherwise might have been considering the idea that they’d missed the boat,” Burchnall says of ProChance. “A lot of them can still come back into the game later, especially with a lot of clubs restructuring their academy systems – there’s more scope to find some slightly older talents who haven’t really been seen yet. Hopefully some young players get opportunities off the back of it.

“It’s easy to say, but the biggest thing you look for in a young player is their mindset and attitude. You look for the obvious attributes, of course – touch on the ball, the way they receive possession, technical and physical competency – but there are also lots of other subtleties around their attitude in training and willingness to learn.

“In those, you learn whether a player has the capacity to perform. With young players you’re looking at potential, so you look for those key indicators.”

The state of football after the coronavirus is yet to be determined, but Burchnall envisages a landscape where clubs turn attention to their own assets and seek out better long-term strategies for success ahead of making short-term gambles.

“It’s been a shock to the system not just for football but general society too,” he says. “From a coach’s perspective, I wonder whether the hire-and-fire mentality of fast success might have to change a bit – clubs could take a longer, more sustainable view towards it.

“That will involve things like recruitment and maybe looking within their own academies at younger players – it’s the way a lot of teams will have to go. Buying in success rarely happens straight away, chopping and changing, and it also costs a lot of money. Clubs will maybe look at a five-year plan rather than single-year ones.”

FourFourTwo.com created this content as part of a paid partnership with ProChance