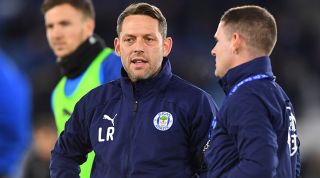 For Leam Richardson, the setbacks in his professional football career were often out of his control. He didn’t always know when they were coming, and nor could he do much about them.

But he is not alone. Football is about talent, hard work and dedication, no doubt – but it’s also about being in the right places at the right times, getting the right opportunities under the right people. To make it in the game, you need a combination of all the above and more.

Richardson was actually one of the lucky ones. After coming through the youth ranks at Blackburn Rovers in the ‘90s – making it to the 1998 FA Youth Cup Final alongside the likes of David Dunn and Martin Taylor – the right-back joined an upwardly mobile Bolton in 2000, before turning out for Notts County, Blackpool and Accrington Stanley until his retirement merged with managing the latter in 2012.

He is now working alongside Paul Cook as Wigan Athletic’s assistant manager – the duo’s fourth club together after previous spells at Accrington, Chesterfield and Portsmouth.

“I have very good memories of my career,” he tells FFT. “I was fortunate to play at every level, all way down from the top flight to the Conference, and have been really fortunate with the managers I’ve had and clubs I’ve been with. There are so many different personalities, from the ex-England manager Sam Allardyce to Brian Kidd, Alan Irvine and John Coleman.

“Probably the biggest setback I had in my career were injuries, which I had all the way through. Emotionally and mentally they sometimes took their toll, coming back too soon and putting extra demands on myself. When I was 30, I had a few operations.

“From a young age you aspire to be the best you can, but not everyone sees your vision. With setbacks and rejection, you’ve just got to stay mentally positive and be genuine to yourself. I started at Blackburn and there were various managers when I got near the first team, so it felt like I was having to reset and restart every time until Kidd gave me my debut [in the League Cup] at Elland Road. He also left, though, so I went to Bolton after Allardyce had shown a lot of interest in me.”

The Trotters’ rapid acceleration meant they were promoted, however, and quickly began to attract the likes of Youri Djorkaeff and Jay-Jay Okocha to Lancashire. After loan spells at Notts County and Blackpool, Richardson signed permanently for the latter – but again, circumstances changed his grand plan.

“Steve McMahon was a very good manager at Blackpool,” he explains, “but again, there was a change of manager and system. Geographically, it was probably a bit too far for me in the first place. I was going to sign for Preston and then Carlisle in one summer, but both fell by the wayside and I ended up being without a club, which was frightening.

“Fortunately, I knew David Dunn from Blackburn, who was good friends with the grandson of Accrington’s chairman. I went there to train and keep fit, but bumped into [manager] Coleman straight away. He told me that he’d love to have me on non-contract terms, so I didn’t have to commit to the club. That suited me then, because I felt like I wanted to play in the League. I stayed for 12 months doing that, but then just figured I was really enjoying it there. We broke all sorts of records that season and then stayed in League Two for a number of years.”

After his contact had opened a door, Richardson’s short-term stint became an eight-year one that eventually led to him becoming manager at the Crown Ground in 2012. With serious designs on becoming a boss in his own right one day, however, Richardson decided to work as Paul Cook’s assistant when the Liverpudlian joined Accrington in 2012 – a fruitful relationship which has since spanned stints at Chesterfield, Portsmouth and now Wigan.

With the benefit of a professional football career behind him and his current position within the game, Richardson knows what it takes for today’s youngsters to make it. The 40-year-old has a longstanding friendship with ProChance head coach Liam Sutcliffe, whose project aims to give promising young players without professional clubs another chance of getting in. With their contacts and strong support network, ProChance can get talented players from any background in front of key decision-makers with their regular showcase matches.

“I think it’s excellent,” says Richardson. “The academy system has a lot of good things going for it, but it can also miss so much. If you’ve got kids who get that extra time to develop as people and their understanding of football, then it can only be a positive thing.

“Everybody develops in different ways. You see the studies of performance vs when people are born, so something like ProChance allows them that extra time to grow as young men. It gives them the chance to stay in that football network when otherwise they might not be able to.

“For these lads, it takes exactly the same things as any other age group to make it. There is always the pressure that you have to deal with within yourself, but it also takes a lot of luck – sometimes, you just have to be in the right place at the right time. It takes a lot more hard work, though, because we all know the percentage of kids who go into clubs early on and then get released by 16.

“To make it and have a career you firstly need the ability, but also need the mindset and be willing to make sacrifices. The amount of birthdays, christenings and parties that I’ve missed in my time is frightening.”

Such dedication, says Richardson – or therefore lack of – is often where young players go wrong from his experience.

“I think they can take their eyes off the ball and forget that they are role models themselves,” he says. “They forget why they wanted to become a player in the first place – I often use the phrase that they like being a footballer but don’t like the football.

“You see the top players up to twice a week on the pitch, but what you don’t always get to witness is that dedication behind the scenes; the diet, when they go to bed, how they train. It’s about the discipline that you have in your routine, and the sacrifices you’re willing to make at any level. You certainly need to be humble throughout and work as hard as you possibly can every day.”

With covid-19 having swept the globe and affected every corner of industry in 2020, football clubs will inevitably need to readjust this summer. With finances affected and the futures of hundreds of senior footballers up in the air, might this be the summer where English football’s promising youth players get more opportunities to shine?

“Depending on how clubs are being run will depend on what their recruitment will be like this summer,” Richardson says. “If squads become smaller, then it will give academy lads more of an opportunity. For the lads who are possibly going to fall out of the game, it can only be a good thing for them. The more homegrown talent that we can get on our pitches, it can only improve the bigger picture.”

To find out more about how ProChance could help you or someone you know get a second shot in the game, visit https://www.yourprochance.com/

FourFourTwo.com created this content as part of a paid partnership with ProChance, who are in no way affiliated with Wigan Athletic