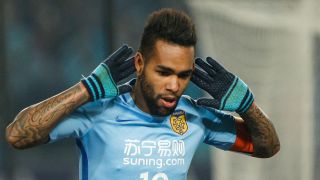 Brazilian talent plying its trade in the Chinese Super League was to the fore in the latest round of AFC Champions League fixtures.

A brace from former Shakhtar Donetsk star Alex Teixeira saw Jiangsu Suning past A-League strugglers Adelaide United, while Ricardo Goulart and Alan hit equalisers for Guangzhou Evergrande in a 2-2 draw at Suwon Bluewings, who had help from two Brazilians of their own.

Jeju United were the day's big winners with a 4-1 triumph at Gamba Osaka, while Eastern played out a 1-1 draw with nine-man Kawasaki Frontale.

Adelaide United's exploits in winning the A-League last season continue to fade into a distant memory. Guillermo Amor's men prop up the Australian top flight this time around and do likewise in Group H after two defeats from as many matches.

They were behind after 14 minutes when Daniel Margush spilled a shot from Ramires and Teixeira pounced from close range.

Adelaide captain Tarek Elrich had a volley chalked off for offside and the visitors' misery was compounded when Teixeira netted a superb solo goal 18 minutes from time – meaning an injury-time header from United substitute Eli Babalj was simply a consolation.

FULL-TIME | Jiangsu FC maintain their perfect start to the campaign with a hard-fought victory over March 1, 2017

Two wins from two mean Jiangsu are top of the standings and the team they beat last time out bounced back in style.

A quick-fire double at the end of the first half turned the match Jeju United's favour – Gamba captain Yasuhito Endo glancing a set-piece into his own net before Lee Chang-min picked out the bottom corner from the edge of the penalty area.

Guangzhou Evergrande remain top of Group G, but Suwon Bluewings were nine minutes away from victory.

Suwon's lead was restored after the half hour when Jonathan was allowed far too much room to slot home – Guangzhou's corner defending again coming under scrutiny – but Alan finished coolly to spare his team-mates' blushes.

Alan's equaliser means its four goals from four Brazilians in this match! March 1, 2017

Guangzhou remain the only side in the section to have tasted victory after Kawasaki Frontale battled to a 1-1 draw at Eastern.

Tatsuki Nara was sent off for bringing down Manuel Bleda in the 13th minute and the forward converted a penalty for the Hong Kong outfit.

But Kawasaki made light of the numerical disadvantage as Ko Itakura slid in an equaliser.

Rhayner was then dismissed for a second booking deep into injury time, with Eastern unable to bounce back from their 7-0 opening-week humbling against Guangzhou.