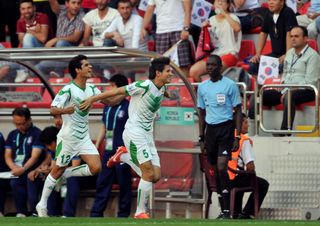 Following a 1-1 draw in the first leg, two early goals for the visitors at the Mong Kok Stadium eventually proved enough to see Ayob Od Barcham's men into the final, where they will take on Al Qadsia.

Erbil made an ideal start to Tuesday's second leg as they moved two goals up in the opening 10 minutes.

Ali Faez put the 2012 finalists ahead just three minutes in before Amjad Radhi doubled their advantage soon after.

With Barcham's side firmly on course for a meeting with the Kuwaiti champions, the Iraqi club were made to sweat when Gao Wen pulled one back for the hosts.

However, Erbil held on to make the final for only the second time in their history - denying Kitchee their first appearance in the AFC Cup showpiece as a result.

Earlier on Tuesday, Al Qadsia secured their place in the final with a thumping 6-0 second-leg win over Persipura, which have them a 10-2 aggregate success.