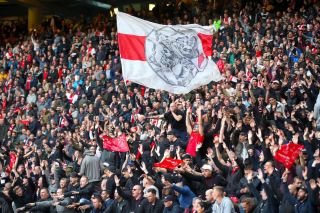 Ajax have been fined by UEFA over crowd trouble during last month’s Europa League tie with Getafe, the Dutch club have announced.

Getafe striker Deyverson was hit by a lighter thrown from the stands after opening the scoring, while fans also damaged seats at the Coliseum Alfonso Perez.

UEFA has imposed a fine of almost £50,000 but opted against activating a suspended one-match ban on travelling supporters, the club announced.

A statement on ajax.nl read: “Ajax has received fines from UEFA for misbehavior during last month’s games against Getafe.

“The European Football Association has imposed a penalty for the destruction of chairs and the throwing of objects with a total amount of 53,250 euros. The responsible parties have been identified, Ajax is starting the procedure to recover the sanctions from them.

“As a result of disturbances and vandalism in October last year during the match with Valencia in the Champions League, Ajax still had a suspended sentence of one match without visiting supporters. This measure is not being imposed now but will remain in force.”

Getafe president Angel Torres promised to file a complaint after objects including glasses of beer were thrown at fans and club personnel in a reserved area at the return leg in Amsterdam. Ajax won that match 2-1 but Getafe won the tie 3-2 on aggregate.