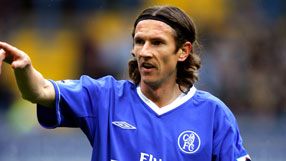 "I've retired. It's official now," the 34-year-old, who started his career with his home team Dynamo Barnaul in 1992, was quoted as saying by Russian media.