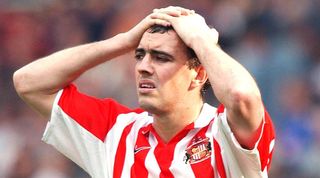 If the Christmas season is meant to bring lasting joy and goodwill, then Wearside's Santa Claus of 2002 didn’t get the memo.

Sunderland were hardly flying high when the mistletoe was broken out that year, but they were two points clear of the relegation zone, had smash-and-grab wins over Leeds, Liverpool and Spurs to their name, and the summer’s marquee signing, Tore Andre Flo, had yet to hit the form he was well capable of – though that was surely a matter of time. In short, there was plenty of reason to believe that the previous year’s 17th-place finish was there to be improved upon.

Then along came Christmas, heralding the most protracted spell of high-intensity misery the modern era has seen: from Boxing Day onwards (when a Wearside winner from Leeds' spindly winger James Milner made him the division’s youngest ever scorer), Sunderland earned themselves a grand total of one point. It came at home to Blackburn on January 11, meaning a full four months of uninterrupted losing – 15 games in total – went by between then and the season’s end. That Chris Riggott and Derek McInnes both found the opportunity to plunder braces at the Stadium of Light in that spell says plenty about the level of aptitude on show from the home side.

Sunderland were eventually put out of their misery at St Andrew’s – the hapless centre-back pairing of Joachim Bjorkland and Talal El Karkouri being given a royal runaround by Christophe Dugarry – with a full five games still to play. (They bounced back two seasons later, but their five consecutive losses upon promotion grants them the dubious – and dubiously applicable – honour of the most consecutive Premier League losses, with 20).

Back in September 2015, Andre Ayew had just collected his player of the month award, Will Grigg's name was a matter of lower-league obscurity and David Cameron was merrily preparing to bolster his power-base with a cakewalk of a referendum.

But as Portsmouth fans well know, plenty can happen in two years. The club’s improbable FA Cup win in 2008 was a joy for all concerned, but despite the fairytale furnishings, those watching the Harry Redknapp-Alexandre Gaydamak double act from afar found it hard to shake to notion that something was deeply awry; that the Fratton Park fortress was little more than a house of cards. Whispers that John Utaka was being paid more than Cesc Fabregas did little to allay suspicions of a financial Faustian pact.

They weren’t wrong: no sooner had the trophy arrived on the south coast than the fire sale began. Pompey slipped to 14th the following season, but the year after that was when the full terms of that pact became glaringly clear: they finished 2009/10 rock bottom, with a chasm of 11 points between them and the rest of the league. The writing was on the wall from the outset, when the summer's jettisoning of various cup-winning mainstays – Sylvain Distain and Sol Campbell among them – was coupled with the less-than-exhilarating sight of Tal Ben Haim, Ricardo Rocha and relegation connoisseur Michael Brown being dumped on the other side of the revolving door.

The season's tone of tragicomedy was set on the opening day, when Fulham came to town and left with all three points after a harmless shot cannoned off Bobby Zamora's right buttock and inside David James's left post. After that came six more feeble defeats – a run during which Portsmouth were reduced to giving away tickets to boost support among an ever-more disenfranchised fanbase. On October 3, Wolves did the honourable thing and permitted Portsmouth their first points of the season, Hassan Nebda's header providing a moment of brief respite from the gloom.

Another doomed project of reckless expenditure, and, as luck would have it, another appearance on this list for Henry James Redknapp. His inherited QPR side of 2012/13 (Mark Hughes jumped ship in November) will be looked back on as the product of one of the most laughably inept ownership operations in football history – no small feat in such a competitive field.

Having dodged relegation by the skin of their teeth the season before (QPR’s utter negligence in that match at the Etihad, leading Manchester City going into stoppage time with their survival at stake and somehow contriving to lose – saved only by the failing of their peers – is that game’s great untold story), the club's billionaire owners decided that the best thing to do was to enact a scattergun recruitment policy with no obvious line of logic beyond simply acquiring famous names. Championship Manager meets Heat magazine, it turned out, wasn’t the shrewdest blueprint.

The upshot was a desperate side comprised of has-been and never-weres, an incongruous patchwork of grizzled British veterans and hideously expensive offcuts from European superclubs. Clint Hill marshalled a back four containing Jose Bosingwa and Fabio; in midfield, Esteban Granero bombed on while Shaun Derry held fort; Robert Green competed with – and usurped – Julio Cesar in nets.

If the aim was to recreate the steel/style elixir that had so inspired Sam Allardyce's mid-noughties Bolton side, then it’s fair to say Junior Hoilett was no Jay-Jay Okocha. Rarely does top-level football see a team of such shambolic disgrace, a jarring rabble of those who couldn't cut it at the top and those couldn’t be arsed trying.

Staggeringly, it took until December 15 – and a tidy brace from one of modern football's great what-if stories, Adel Taraabt – to secure Redknapp's side their first victory. By that stage a heedless and bloated squad had long since resigned themselves to a season of reputation-shredding humiliation, the club's trickle-down incompetence embodied in a team whose value for money would have made Peter Ridsdale cringe. The merciful embrace of relegation was finally bestowed by Reading in mid-April with three games left. With only pride left to play for, QPR lost all three.

NEXT: Longest winless streak, games without a goal...

In the Premier League's early-90s glory days, Palace were the archetypal yo-yo club, ricocheting between the new-look breakaway league and the newly named Division One for a full five seasons on the spin. Relegated in the Premier League's inaugural season by a whisker in 1993 – finishing two goal-difference points below Oldham – Palace were fired back into the top tier at the first time of asking, propelled largely by the free-scoring exploits of Chris Armstrong.

While Armstrongs's goalscoring only dipped marginally upon reaching the top flight – from 20 to 18, to be precise, and that despite a month’s ban for testing positive for cannabis – the output of his side as a whole plunged desperately. Palace finished as the division's lowest scorers, and things came to a head during a bleak festive period when 838 long minutes dragged by without ball meeting net for the south Londoners. Impressively, Palace still managed to wring four points from their seven-game barren spell – the spritely trio of Nigel Martyn, Gareth Southgate and Chris Coleman doing plenty to offset the toothlessness up top – but the team nonetheless sank from 12th to 18th.

And yet despite it all, Palace somehow evaded the bottom three come the season’s end. Unfortunately that didn't stop them getting banished to the second tier: due to the streamlining of the division from 22 clubs to 20, there were four relegation spots going that year, and Palace duly nabbed the spare one.

He may not be especially high on the list of Pride Park heroes, but the truth is that Derby fans have a great deal to thank Kenny Miller for. In an otherwise thankless season for the striker (four goals in 30 outings), it was his goal against Newcastle that secured Derby their first and only win of the club’s now-folkloric 2007/08 campaign.

Without the Scot’s opportunism – and the inability of Sam Allardyce’s desperate strikeforce to summon an answer against Andy Todd & Co. – an entire league season would have passed by without a single win. (Or indeed a win of any self-respecting sort: they crashed out of the League Cup straight away, to Blackpool, and their sole FA Cup win, against Sheffield Wednesday, required a replay and penalties.)

The defeat of Newcastle was an island of joy amid a season of irredeemable misery. That it came sandwiched between 6-0 and 5-0 shellackings, at Anfield and the Emirates respectively, was grimly apt. The fact that the club’s lone victory came in their sixth game meant that the remainder of the campaign was one long winless run – 32 games – and indeed, a similarly dire start to their next season took their winless tally to a mighty 36.

SEE ALSO Derby County's shocking 2007/08 revisited: the Premier League's worst ever season, told by those who were there

LIST The 8 worst seasons in Premier League history... that didn't end in relegation

QUIZ Can you name the three most expensive signings for every Premier League club?

While the West Brom of today are a resolutely Pulisian outfit known for their army of herculean centre-backs and fetish for clean sheets, it wasn’t ever thus. Seven years ago, as part of a doomed aesthetic experiment, Roberto Di Matteo was put in charge at The Hawthorns and his starry-eyed attempts at enhancing the team’s playing style saw the likes of Carlos Vela and Giles Barnes installed alongside Dean Kiely and Nicky Shorey.

Like many such experiments it was gormless in conception, bungled in execution and called off before it had really begun. Its true legacy, though, was in a wildly unskilled defence which managed to finish the season having conceded the second-most goals in the division despite being honed into shape by the belt-and-braces conservatism of Roy Hodgson from February onwards. Between their second and penultimate game of the campaign, 34 in all, the Baggies failed to keep a single clean sheet - not that it stopped them from finishing the season in a respectable and eminently Hodgsonian 11th place.

The 5 most underrated Premier League managers of all time