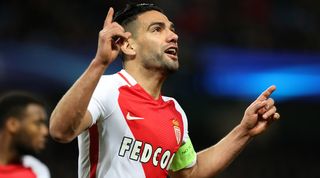 The trophy-winning upsurge of a club powered by an oligarch’s billions is not often the place to look for an uplifting story of human struggle. Yet set amid the private casinos, gleaming yachts and charitable tax rates of Monte Carlo is exactly that.

Monaco may well be the plaything of Dmitry Rybolovlev (personal fortune: $7.3bn, personal art collection: $2bn) but the club have also facilitated a spectacular rebirth of one of the great pure goalscorers of the modern age – a rebirth that is all the more magnificent for being utterly unforeseen.

Three months ago at the Etihad Stadium, when Radamel Falcao thundered onto a long pass, muscled John Stones to the floor and planted an exquisite chip over Willy Caballero into the back of the Manchester City net, it was almost laughable to think that this was the same striker who'd spent two years trundling around in the Premier League with the kind of forlorn lethargy which spelled out in no uncertain terms that his career at the top had been consigned to history.

Indeed, the Colombian’s time at Chelsea and Manchester United was so depressingly fruitless, his powers so obviously diminished, that his place within those club’s squads was generally accepted to be a sign of his agent’s incredible abilities rather than his own.

For those who had witnessed his colossal displays at Atletico Madrid in 2011/12 and 2012/13, it was difficult to watch. For two seasons in the Spanish capital, Falcao was a magnetic spectacle, a centre-forward who was both wholly modern and gloriously old-fashioned.

In an age of false nines and multi-faceted forwards, Falcao was a pure, pared-back No.9, who pursued his remit of scoring goals with a single-minded barbarity that brought to mind the great centre-forwards of the '90s: Batistuta, Shearer, Ronaldo.

Yet as much as he was a throwback he was also at the game’s cutting edge, able to lead the line on his own, to score any and every type of goal ("You have to be as complete as possible, you have to be able to do everything, or you won't score goals,” he once said) and in possession of the sort of bronzed, muscle-bound physique that spoke of the most modern application of conditioning, nutrition and sports science.

His highlights reel from those two years – a full 70 goals in total – is a thing of visceral beauty, notable for his admirable commitment to celebrating every goal like it's the decisive strike in the World Cup final (call it Inzaghi Syndrome), but also for how varied his repertoire of finishes is.

He possessed the uncanny ability to summon either savagery or subtlety depending on what the situation demands (his penchant for a chip was plenty obvious back then, too).

"This is a historic night. Falcao is the best striker in the world," said Diego Simeone in December 2012, having witnessed the Colombian score five in a 6-0 win over Deportivo – and he was far from the only one to hold that opinion about a player who seemed indestructible.

A year later, though, Falcao proved that his knee ligaments were, in fact, as fragile as the next man’s – a heavy challenge left the striker, who had joined an upwardly mobile Monaco six months earlier, in a crumpled heap in the penalty area and with that most feared of injuries: a damaged cruciate.

What followed, once he had undergone months of gruelling rehabilitation and missed out on a World Cup in his home continent, were those two years of misery in England. It’s difficult to overstate just how bleak things looked during that time.

Falcao’s year-long loans at Old Trafford and then Stamford Bridge are marked out less by the desperate lack of goals (five in total, over 41 appearances) than for the visible physical deterioration in a formerly herculean athlete.

He was clearly not helped by his surroundings – a player whose situation demanded time and patience parachuted into two tailspinning superclubs who needed results in the here and now. Yet that was only part of the story; the rest lay in his personal demise.

Falcao simultaneously looked exactly the same as he had before his injury, and yet unrecognisable from his former self – living, breathing evidence for Sick Boy’s theory of life: “At one time, you've got it, and then you lose it, and it's gone forever.”

Set against this desolate context, then, the resurgence of the 31-year-old under Leonardo Jardim this season has been both wildly unheralded and faintly life-affirming. As part of a freewheeling Monaco side that has taken both France and Europe by storm – paradoxically excelling as the Rybolovlev era has entered an age of relative austerity – Falcao has not only hinted at his former glories, but gone some way towards reliving them.

As much as a club in their position can, Jardim’s Monaco have captured the imaginations of fans across Europe this season with their commitment to jet-heeled attacking, and it has perhaps suited Falcao that he has been only one of a host of standout players, with other, younger forwards dominating the headlines.

It would be wrong to claim he is the player he used to be – in fact, his game has undergone fairly significant readjustments: he is not the attacking spearhead, for a start, but one of a front two. Where once he would run the channels and surge forward from deep, he now stays largely within the width of the penalty box.

He is no longer in the habit of steaming past defenders in a foot race, and the finishes tend to be guided rather than battered into the net. His celebrations, too, are not always so fervent these days – perhaps the mark of a man with a slightly new perspective on football’s importance.

But Falcao’s true signature trait – perhaps his only signature trait, the thing everything else was in service of – is as apparent as ever. In the league, he has 19 goals and counting; in the Champions League he has seven in nine (somewhat absurdly, it’s only his second season playing in the competition).

All this from a man who 12 months ago looked an indisputable write-off. It has been a marvellous reminder of sport’s capacity to confound even the most apparently obvious of verdicts.

11 great players who flopped in the Premier League

Tuesday’s face-off, between Falcao and Juventus’s grizzled defensive unit of Buffon-Bonucci-Barzagli-Chiellini, brings together the modern era’s masters of their respective arts. It’s unlikely, but if he can conjure the currency to take his side into this final of Europe’s premier competition, it would be the arch goalscorer’s crowning achievement – and one that few could begrudge him.

"I never think I'm not going to score; I never panic, I never start to worry,” Falcao said back in his Atletico days. “I believe I will score. I just know, no matter how long I have to wait, that the goal will come."

For a while, though, he had stopped believing, and he stopped scoring. Not any more.