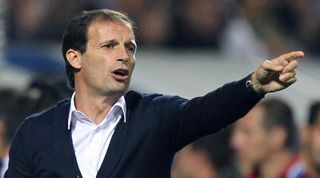 Allegri succumbed to his first loss at Juve boss at the Vicente Calderon, with Arda Turan's scrappy goal 16 minutes from time enough to give the hosts all three points from a tight, tense UEFA Champions League Group A clash.

Italian champions Juve travelled to meet their Spanish counterparts with a flawless record of six wins from six games played this season, with Allegri's side not conceding a single goal in that sequence.

However, they came unstuck in Madrid, as Turan converted Juanfran's deep cross after some uncharacteristically shaky defending from Juve.

And, with all four teams in Group A on three points after two games following Malmo's 2-0 win over Olympiacos, Allegri has called on his side to bounce back against the Greek champions next time out.

"We paid a high price for one mistake when they scored. They made the most of that chance," rued Allegri.

"It's a defeat after a good game, a good performance and a game we even controlled for long periods.

"We knew it'd be a tough game, and that one mistake could make the difference.

"Evidently the group is very open after today's results - Malmo has shown clearly they are no minnows by beating Olympiacos.

"We have three points each, it's all very open, anything can happen.

"We obviously have good chances to go through, but we need to start by winning our next game."