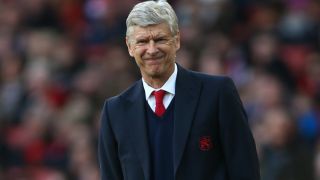 Ashley Cole believes Arsene Wenger is the ideal candidate to take over as England manager due to his track record of nurturing young talent.

The Football Association is in the hunt for a new boss following Roy Hodgson's resignation in the wake of England's dismal last-16 defeat to Iceland at Euro 2016.

Sunderland manager Sam Allardyce and Hull City's Steve Bruce have both been interviewed for the job, while Eddie Howe and Jurgen Klinsmann are also thought to be in the running.

However, former England international Cole - who won the Premier League twice and FA Cup three times during his time at Arsenal - has thrown his weight behind Wenger.

"I don't know going forward, should they go with a foreign manager or stick with an English manager? It's debatable. Personally I would like to see Wenger in charge," Cole, who now plays for LA Galaxy in MLS, told Sky Sports.

"He is good with the youngsters, knows how to win and knows his football. If I had to choose a manager, it would be Wenger.

"He could take the team to the next level. There is a lot of talent and they need a bit of experience.

"For me, someone like Wenger, who can nurture the youngsters like he has done at Arsenal for years, would be good. I would like to see Wenger."