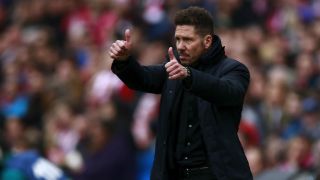 Head coach Diego Simeone hailed his players as Atletico Madrid secured a Champions League place after the "most complicated season" since the Argentine's arrival.

Atletico salvaged a 1-1 draw at Real Betis in LaLiga but there was still cause for celebration on Sunday, with the stalemate enough for the capital club to clinch third position and a spot in next season's elite European competition.

And as Simeone – who continues to be linked with the coaching vacancy at former club Inter – reflected on Atletico's campaign, he highlighted the struggles as the gap grew between his side, Barcelona and Madrid.

"It's been the most complicated season since I arrived at the club, and we are reaching the end, once again, third," Simeone told reporters.

"We never gave up, we were very regular in the second round of play and that allowed the football players to be rewarded again with clinching a direct passage to the Champions League.

"It seems easy due to all the achievements that we've had in recent times, but for me it's a tremendous joy."

Simeone continued: "We will miss two games in the season, a shame, because they are the two most beautiful, the Cup and Champions finals.

"But especially for those who did not believe in this team in October and November, that I do not want to forget."

Simeone had stressed the importance of Sunday's match in Atletico's bid for Champions League qualification amid doubts over his future.

But Atletico fell behind at the Benito Villamarin, when Dani Ceballos unleashed a thunderbolt in the 57th minute.

"We began well in a difficult, tricky, complicated match, Betis came with hardships of defeats both home and away, and obviously they needed to play a good match at home," he said.