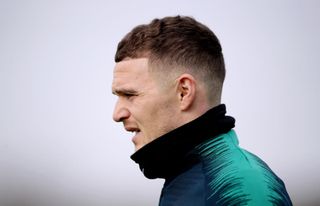 Kieran Trippier says Atletico Madrid will head into their Spanish Super Cup tie against Barcelona confident of reaching the final.

The LaLiga giants will lock horns for a place in Sunday’s showpiece of the revamped tournament when they meet in Jeddah, Saudi Arabia on Thursday.

Atletico trail their opponents by five points in LaLiga and were on the wrong end of a 1-0 defeat when the two sides met last month.

But former Tottenham defender Trippier believes Diego Simeone’s side, on a run of four consecutive wins, can make it five in a row against Barcelona.

“We’ve got a big task in front of us tomorrow,” said Trippier, who has played 20 times for Atletico this season following his summer switch from north London.

“We have to listen to the coach’s tactics to try to earn the result we want.

“We know that Barcelona are a fantastic team, one of the best in the world. But we’ve got to think about ourselves. We’ve earned fantastic results recently, so we’re confident.”

But he will be without goalkeeper Marc-Andre ter Stegen, ruled out with a knee problem, and Ousmane Dembele, struggling with a hamstring injury.

A reward for the winners of Thursday’s match will be a showdown against either Real Madrid or Valencia.

And Valverde says he will treat his side’s last-four clash against Atletico like a league match as Barcelona bid to win the cup for a 14th time.

“Obviously we are playing against Atletico Madrid and we know there are no easy games against them, and especially teams of that quality,” he said.

“We need to be alert because anything can happen. It is a knockout game – the team who wins will go through to the final – so we are treating it like a league match.

“We will be looking for the victory and we know how Atletico play. We saw with the last league game that it was a tight game but we were able to win it.”