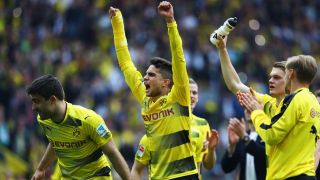 Marc Bartra reflected on one of the happiest days of his career after returning for Borussia Dortmund's thrilling final-day 4-3 win over Werder Bremen in the Bundesliga.

Bartra suffered a broken wrist that required surgery when Dortmund's team bus was targeted by explosions ahead of their Champions League quarter-final first leg against Monaco in April.

The Spain international was an unused substitute against Augsburg last week and completed 90 minutes as Thomas Tuchel's men twice came from behind to seal a third-place finish and a return to the Champions League group stage next term.

"I think it's one of the happiest days of my professional career," he told BVB Total.

What a match, so thrilling, what an atmosphere, such a feeling.. Really HAPPY and PROUD!Tarde increible la de hoy..FELIZ!DANKE Familie!! May 20, 2017

"I experienced so much pain in what was a very negative experience.

"I'm thinking about the people close to me – my family and all my team-mates who've helped me throughout and the fans.

"I feel very happy. I feel loved by everyone. I finished the game. We've achieved our target.

"Winning wasn't just about three points - it was about playing football again, which is the thing I love the most and that's why it's been so emotional."