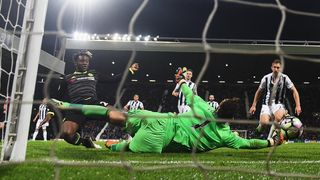 Michy Batshuayi was over the moon with his Premier League title-winning goal in Chelsea's 1-0 victory over West Brom that saw the Blues crowned champions on Friday.

The Belgium international has been struggling to secure regular first-team action at Chelsea following his move from Marseille at the start of the season and has only featured sparingly.

That did not stop him from becoming the club's hero against the Baggies, though, and he has admitted his strike was a dream come true.

"It is the stuff of dreams," Batshuayi told the club's official website.

"We have had a fantastic season, we have worked really hard and everyone is so happy. Above all, we are the champions. It was a chance to reach our objective as soon as possible and we are all delighted we did it.

"I am very happy to have helped the team at a big moment. Of course it has been a very difficult season for me personally, but I knew it wouldn’t be easy because this is a great club with great players. I have worked very hard and I have now made a big contribution which is a dream.

"Even if I have not played much I have learned a lot during the week in training, and whenever I get minutes I give my maximum.

"Now I want to keep helping the team in the last few weeks which are very important because we have a Cup final to win, and we will give everything to achieve that."