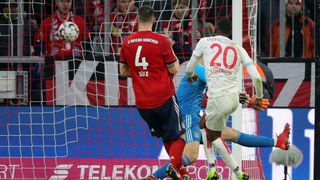 Dodi Lukebakio scored a stunning hat-trick as Fortuna Dusseldorf secured a 3-3 Bundesliga draw with Bayern Munich on Saturday to pile the pressure onto Niko Kovac.

Defeat to Borussia Dortmund before the international break had added to speculation over Kovac's future and the Bayern boss will come under increasing scrutiny after his side threw away a 3-1 lead against their lowly opponents.

They looked set for a routine win when Niklas Sule and Thomas Muller scored in the space of three first-half minutes, but Fortuna clawed their way back into the game after 44 minutes through Lukebakio.

Muller restored Bayern's two-goal advantage shortly before the hour, but Lukebakio had the final say, scoring breakaway goals in the 77th minute and three minutes into stoppage time to seal a superb point for his side.

Manuel Neuer had to be alert inside the opening minute to turn Lukebakio's low drive around the post, while Jerome Boateng flashed wide from long distance for the hosts after 14 minutes.

Sule's first goal of the season set Bayern on their way in the 17th minute, the Germany defender lashing beyond Michael Rensing after a corner had fallen to him 10 yards out.

That lead was doubled just three minutes later when Muller collected Boateng's long-range pass and prodded past Rensing for his third league goal of the campaign.

Lukebakio pulled one back for Fortuna on the stroke of half-time, taking advantage of generous defending from Boateng and Sule to thump past Neuer from five yards.

Muller looked to have put the game beyond the visitors, curling a measured drive into Rensing's bottom-right corner from Robert Lewandowski's lay off. Lukebakio had other ideas, though.

The Belgian sprung the offside trap to score his second 13 minutes from time and then produced an almost carbon copy in stoppage time, powering away from Sule to slot past Neuer and stun the Bundesliga champions.

What does it mean? Kovac scrutiny set to intensify

The Bayern boss can expect a difficult few days after somehow seeing his side throw away two points. Dortmund's 2-1 win over Mainz means the Bavarian giants are now a whopping nine points behind the league leaders. Fortuna, meanwhile, remain in 17th but will be buoyed by the way they fought their way back to earn a point.

The on-loan Watford forward proved devastating in front of goal and any fears that he would buckle under the pressure of bearing down on Neuer in stoppage time were dispelled with another composed finish.

The Polish striker lacked his usual composure in front of goal, twice lashing wide when he would have expected to hit the target. Lukebakio at the other end showed him how it should be done.

Bayern need just a point against Benfica on Tuesday to book their place in the Champions League knockout stages, while Fortuna host Mainz in the Bundesliga on Friday.