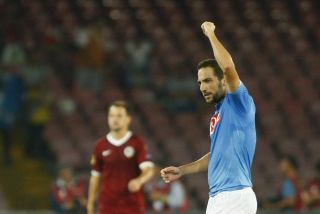 The Serie A outfit were 3-1 winners in their UEFA Europa League Group I opener but the home side were forced to do it the hard way.

Napoli found themselves trailing after 14 minutes in Naples, when Josef Husbauer opened the scoring for the Czech champions.

Sparta Prague were pegged back nine minutes later as Gonzalo Higuain converted a penalty, before a second-half brace from Dries Mertens sealed maximum points for the Italian outfit.

While there is still room for improvement, Benitez said he was pleased with Napoli's response.

"I liked the positive reaction from the team," Benitez told Sport Mediaset.

"After conceding that goal, we played a good game and it was all very positive.

"We could've done better defending corners, but the strikers created many scoring opportunities.

"Sparta Prague started with a 4-4-2 and pressed us a lot, so it wasn't easy to control the ball."

The win provided a much-needed boost for Napoli, who were surprisingly beaten 1-0 at home to Chievo in Serie A last week.

Higuain missed a first-half penalty before Chievo went on to win the game.

But the Argentina international had no such trouble from the spot against Sparta Prague, firing low past David Bicik in the 23rd minute.

"I hit it in the same corner, but fortunately this time it went well," said Higuain.

"After Sunday's defeat we wanted to prove ourselves, as we really should not have lost against Chievo.

"Tonight we wanted to prove that this team has character."