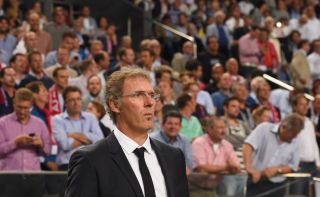 Ligue 1 champions PSG took a 1-0 lead after just 14 minutes through Edinson Cavani and appeared comfortable for much of Wednesday's encounter at the Amsterdam Arena, despite Ajax enjoying plenty of possession.

Blanc's men spurned several opportunities to put the game to bed, the most glaring of which came immediately after the restart when Lucas Moura shot wide when one-one-one with goalkeeper Jasper Cillessen following a mistake by Ajax defender Niklas Moisander.

And they were ultimately punished for a lack of conviction as Lasse Schone levelled matters with a curling free-kick with 16 minutes left.

Schone then forced goalkeeper Salvatore Sirigu to tip a shot onto the post from another set-piece as PSG were forced to settle for a Group F point, leaving Blanc to rue what might have been.

"Ajax played well with the ball," he told Canal Plus. "This is the first time in a group stage that a team ends with more possession than us.

"They scored from a set-piece but we could have killed the game off before.

"We are disappointed because we had not come to share the points, but we must recognise that Ajax posed us big problems."