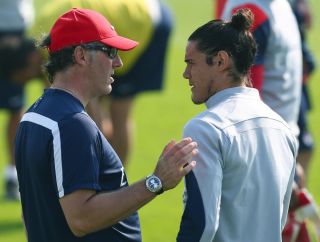 In the five games PSG have played without injured talisman Zlatan Ibrahimovic, Cavani has scored three of his side's six goals, including a brace that secured victory in the Coupe de la Ligue final.

The forward has been linked with a move to Manchester United recently, but Blanc is keen for Cavani to remain a focal point for PSG.

"Cavani can be a leader on the field. Off the field, I think it's more complicated for him to be one," said Blanc.

"We have other leaders in the group such as Thiago Silva and Zlatan Ibrahimovic.

"I think this year's team has made good progress, both defensively and offensively. It is very satisfying."

After PSG were beaten in dramatic fashion by Chelsea in the UEFA Champions League, they suffered defeat in Ligue 1 to Lyon.

However, they recovered to clinch the Coupe de la Ligue with victory over the same opponents before putting themselves on the brink of back-to-back league titles courtesy of a win over Evian.

"We took some time to recover from the setback in the Champions League," Blanc added.

"We still have to get the title. We have to take the title again, this is a nice motivation for the team.

"This season Monaco have allowed us to stay focused on our objectives."