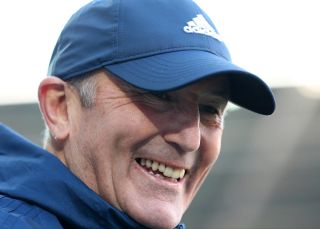 The one-time Bolton schoolboy prospect, an unused substitute in Saturday’s defeat at Swansea, struck twice in the first half to give Tony Pulis’ side a 2-0 victory – Boro’s first success in eight games.

“You get criticised for not playing him on Saturday,” said Pulis after his team’s badly-needed return to form.

“But he is a young lad who is still growing into his body. People say ‘he is a young lad, he can run round the whole time.’ This is a different level and you have to play the level to understand it.

“He has got two goals tonight and hopefully he can carry it on. I have been delighted with him. He is a great kid and never dropped his head. He has never been a minute’s problem.

“Most probably he’s been too nice.,” added Pulis. “And he is still too nice a footballer.

“He gets brushed off a little too easy but that will come. Another two goals will do him a world of good.”

Boro’s slump at the wrong time of the season has heaped pressure on veteran Pulis.

“I am just pleased for the players,” he added. “We have had a run of seven games without winning but I don’t think they were six games we deserved to lose.

“Four of those games we could easily have won. And if we didn’t win them, then we should have picked points up.

“Tonight though they got their just rewards because they took two of the numerous chances we again created.

“It’s the same old story. We have got to be more clinical but we got two goals and a clean sheet so I am delighted.”

“We have not been paid and there’s no news on that,” he said after Wanderers’ second home defeat in four days.

“The scenario hasn’t been addressed. People won’t keep coming into work without the wages.

“People are finding it difficult to keep the club functioning properly. The lads and the staff are low.

“It’s OK saying footballers earn good money. Our players are not at that end of the spectrum. A lot have mortgages to pay.”

On the game Parkinson said: “The goals were disappointing because I thought we were in the game.

“We kept trying to play but we were up against a team with £40million top end of the pitch quality. When you make mistakes you invariably get punished.”