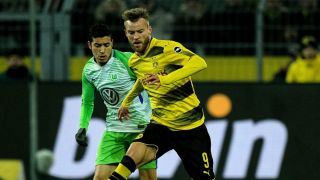 Pierre-Emerick Aubameyang's killer instinct in front of goal was sorely missed by Borussia Dortmund as they somehow failed to make the most of their chances in a 0-0 draw with struggling Wolfsburg on Sunday.

Aubameyang was left out by coach Peter Stoger after failing to attend a team meeting on Saturday and, although Dortmund posed a constant threat in attack, they spurned a host of opportunities and ultimately failed to claim the victory that would have moved them up to second in the Bundesliga.

Andriy Yarmolenko looked particularly keen to step up in Aubameyang's absence and the Ukrainian caused Wolfsburg no end of problems, but he was arguably guilty of the two worst misses – one in each half.

Alexander Isak – given his first start in Aubameyang's place – went closest in the first period, though, blasting against the right-hand post just prior to half-time.

Seventeen-year-old debutant Jadon Sancho - an August arrival from Manchester City - then struck the opposite upright early in the second half, as Dortmund's frustration continued to increase.

Jadon Sancho has just become the first Englishman in history to start for in the January 14, 2018

Dortmund were full of youthful endeavour during the first half, looking bright in attack and creating a host of decent chances.

Yarmolenko inspired the first, attacking on the break and flashing a low ball into the danger zone, but Maximilian Arnold crucially denied 18-year-old Isak inside the six-yard box.

Sancho then went close in the 20th minute, finding the side-netting from a tight angle when Yarmolenko's teasing cross went all the way to the far post.

The lively Yarmolenko should have opened the scoring soon after, meeting Lukasz Piszczek's delivery and prodding wide from close range.

Wolfsburg nearly took advantage of Dortmund's profligacy just before the break, but Roman Burki produced a smart save to deny Daniel Didavi after a clever one-two with Yunus Malli.

And Isak let Wolfsburg off the hook again on the stroke of half-time, smashing a volley against the top of the post following Mario Gotze's incisive pass.

Dortmund's dominance continued into the second half and Yarmolenko inexplicably shot over from five yards after a Gotze ball at the end of a rapid counter in the 48th minute.

The left-hand post then came to Wolfsburg's rescue a few moments later, denying Sancho a dream debut goal after he latched on to Shinji Kagawa's pass from an acute angle.

Wolfsburg seemed to wake up after that let-off and Renato Steffen - given his debut off the bench - nearly punished Dortmund just after the hour, but he could only head wide under pressure from Piszczek.

Despite Wolfsburg's improvement, one final chance fell to Sancho late on, but the teenager saw his effort crucially blocked after substitute Andre Schurrle's cross fell kindly for him and the visitors ultimately held on to move four points clear of the bottom three.