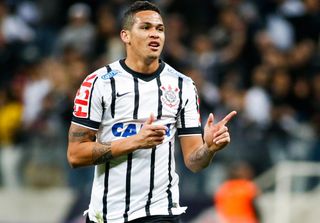 Luciano came off the bench and scored the match-winning goal in the 73rd minute at Estadio Governador Magalhaes Pinto in Belo Horizonte.

And Corinthians seized the opportunity, despite losing two key players of their own to Brazil coach Dunga - Gil and Elias.

After Petros dazzled his way past three defenders, substitute Luciano - a replacement for Angel Romero - guided the ball beyond Cruzeiro goalkeeper Fabio with 17 minutes remaining.

The away triumph earned Corinthians back-to-back wins as they climbed up to fifth in the standings with 46 points from 27 matches.

Defending champions Cruzeiro had their lead reduced after the second-placed Sao Paulo accounted for Atletico PR 1-0.

Despite Kaka's absence due to Brazil commitments, Sao Paulo won thanks to Maicon's sixth-minute goal, with the midfielder curling into the top-left corner in style.

Sao Paulo are two points ahead of Internacional, in third, after they were embarrassed 5-0 at lowly Chapecoense on Thursday.

Diones and Leandro both scored twice in Chapecoense's shock win, as they climbed out of the relegation zone.

Gremio are a point further back in fourth following their routine 2-0 win at home to Sport Recife.

In other results, forgotten Brazil international striker Leandro Damiao was the difference as Santos edged Bahia 1-0 for a third consecutive victory, while Palmeiras beat Botafogo by the same scoreline.

Henrique's 50th-minute strike was enough for Palmeiras to climb three points clear of the drop zone, while Botafogo remain at the foot of the table.

Flamengo ended their five-game winless streak, prevailing 2-1 at Figueirense, while Goias overturned a two-goal first-half deficit as they earned a dramatic 2-2 draw against Vitoria.