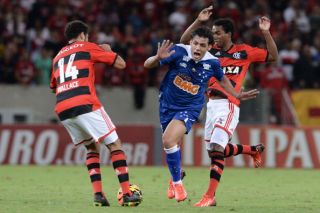 Ricardo Goulart notched his sixth goal of the season as Cruzeiro defeated Flamengo 1-0 to preserve their four-point lead over Botafogo at the top of the standings, while Gremio and Atletico PR sit two points further back in third and fourth.

Meanwhile, Fluminense knocked off Bahia 1-0 thanks to a fine finish from Biro Biro to end a four-game winless streak in all competitions to move up to 14th.

In Belo Horizonte on Sunday, Cruzeiro hosted struggling Flamengo - who had just one victory in their past six games in Brazil's top tier - but the home side had to wait until the second half to notch the only goal of the match.

Everton Ribeiro went closest to scoring for Cruzeiro in the first half when his 30-yard half-volley was acrobatically tipped over the bar by Flamengo goalkeeper Paulo Victor.

Just three minutes into the second half, Goulart went down in the penalty area but was shown a yellow card for diving after Victor made no contact with the attacking midfielder.

Goulart made up for that in the 53rd minute, however, when he followed up his own header onto the post, to tap home the rebound with Victor still sprawled on the ground.

Cruzeiro should have doubled their lead on the hour mark but Willian Gomes de Siqueira struck the post with an empty net gaping ahead of him.

Despite that miss, Cruzeiro held on for their fifth straight win in the Serie A.

In Rio de Janeiro on Saturday, Fluminense won for the first time this month when Biro Biro slotted his shot from a tight angle in the 66th minute, after Bahia's goalkeeper Marcelo Lomba could only parry Rafael Sobis' long-range strike.

The top three teams all won as Botafogo came from behind to triumph 2-1 away to Criciuma, while Gremio needed an 87th-minute penalty from Kleber to defeat Portuguesa 3-2.

In other results, Vitoria drew 1-1 with Atletico Mineiro, Santos defeated Goias 1-0 and Corinthians were held to a 0-0 stalemate with Nautico.