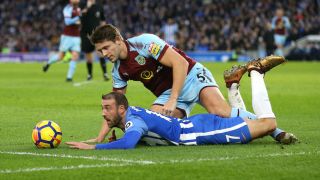 The defender, who had earlier given away a penalty - which was subsequently missed by Murray - for a tangle of legs with the striker, appeared to aim an elbow into his opponent's ribs in the 35th minute.

The incident was missed by referee Chris Kavanagh but it was announced on Monday that Tarkowski had been charged, with a three-match ban confirmed by the Football Association (FA) on Thursday.

"James Tarkowski will miss Burnley's next three matches after he was charged with violent conduct," an FA statement read.

"He accepted the charge but argued the suspension was excessive. This was rejected by an Independent Regulatory Commission."

Tarkowski, recently linked with the likes of Arsenal and Manchester City, will miss matches against Tottenham, Manchester United and Huddersfield Town.