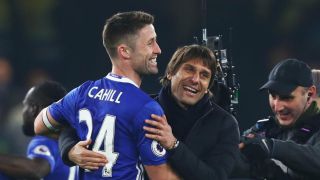 Chelsea captain Gary Cahill has "no idea" about Antonio Conte's future at the club as rumours the Italian is on his way out of Stamford Bridge continue to build.

Former Juventus coach Conte, who led Chelsea to the Premier League title in his first season in charge, has regularly spoken about his desire to return to Italy.

Chelsea are 15 points behind runaway Premier League leaders Manchester City this term, although they reached the EFL Cup semi-finals and remain in the Champions League with a last-16 tie against Barcelona to come in February.

Chelsea and Conte are reportedly split on the club's transfer strategy, but Cahill believes City's extraordinary form is more of a reason for their massive lead than the Blues underperforming.

Asked if the squad remain behind Conte, Cahill told reporters: "Of course we are. There is nothing between the manager and players, whatsoever. We continue to work hard. If you look at the league, if Manchester City hadn't done what they've done, the title would still be there to be won.

"For them to be in the position they're in this season, they've broken Premier League records. It shows how good they've done. If they hadn't done as well as that - I know it sounds obvious - we would still be in with a chance of the title.

"This season they've been fantastic, but we still aim to fight for second place. We have a big month coming up in February, let's hope we come out at the end of that month in a positive way.

Speculation about Conte's long-term future has been a constant background presence throughout his 18 months in charge of the club.

"I have experienced it a lot in my time here, but this has been a successful period," Cahill added.

"Chelsea is a successful football club and he is a top manager. We can't have any impact.

"We just sit and we work and try to produce what he asks of us. He is very experienced and, more often than not, we get results."