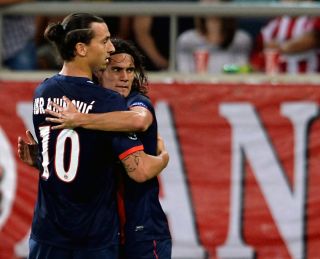 The Uruguay international made the switch to the Parc des Princes in a reported €64 million deal in July, ending his three-year spell at Serie A side Napoli.

His arrival led to speculation that Swedish striker Ibrahimovic could depart the club, something the French outfit vehemently denied.

The pair have struck up a fruitful partnership in France's top flight with seven goals between them, to help PSG to an undefeated start from their nine games.

And Cavani is thrilled with the link-up.

"Well, for me it's a beautiful experience," Cavani told Champions Matchday. "To pair up with him, for a young player like me, it's really a nice experience.

"But when you go onto the pitch you're not thinking about who you're playing with, you're just thinking you're part of a great team – and about your desire to win."

PSG continue their Ligue 1 campaign with a home fixture against Bastia on Saturday, before their UEFA Champions League encounter away to Anderlecht.

The Parisian giants have started with back-to-back victories over Olympiacos and Benfica in Group C, and Cavani stressed the importance of finding a winning mentality in Europe's premier competition.

He added: "Starting with a victory was an important step.

"When you win and you're getting results, that helps you do things more calmly. We still have to adjust and improve a lot."