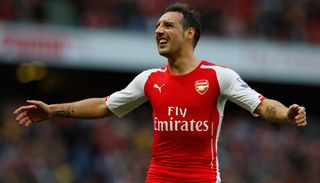 Despite beating Borussia Dortmund 2-0 at the Emirates Stadium last time out, Arsene Wenger’s men are set to finish second in the standings for the sixth time in eight years after letting a 3-0 lead slip against Anderlecht in their previous tie.

Having bounced back against Dortmund, another victory at Galatasaray on Tuesday could secure top spot should Jurgen Klopp’s side also stumble against the Belgian champions.

And Spanish playmaker Cazorla says the Londoners must prove that they can 'react in the right way' and build confidence going into the knockout phase.

Speaking exclusively to FourFourTwo, he said: “The Anderlecht game was a nightmare for us. To be leading them 3-0 and then allowing them to come back from three goals down in your own home is unacceptable.

“It’s something inexplicable that happened to us and we have to get over it, we have to show everyone that we can react well and in the right way, even though it looks like we’ll be second in the group instead of first.

"We know it’s worse because we’re going to have to play opponents who finished first and are at a really high level, like in the last few seasons when we met Bayern Munich. But ultimately, if you want to win the Champions League or have ambitions to win it you have to play the best.

"We’d obviously prefer to play a weaker rival, but if we end up against a first class opponent then we have to get on with it and try to beat them if we want to achieve something big. Qualifying is the main thing."