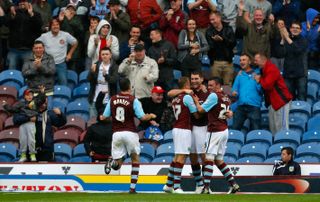 Arfield struck 10 minutes from time at Portman Road on Saturday to give Burnley a sixth successive Championship win and with QPR unable to win at Millwall, Sean Dyche’s side are now out in front on their own after making their best start to a season for 116 years.

Rangers looked set to stay level on points with the Lancashire side at the top of the table, but a late goal from substitute Jermaine Easter denied them all three points.

Nico Kranjcar had put Harry Redknapp's charges in front in the first half, but Scott McDonald ended their run of eight games without conceding a goal when he equalised early in the second half.

Charlie Austin's fifth goal in his last four games put Rangers back in front, but Easter had the final say.

Third-placed Leicester City are now just a point behind Rangers after they won 2-1 at home to Huddersfield Town.

Jamie Vardy opened the scoring and an Anthony Gerrard own goal doubled their lead. Paul Koncheskey then put through his own goal to give the visitors hope, but when their leading scorer James Vaughan was sent off, there was no way back.

Meanwhile, Blackpool are up to fifth after Tom Ince scored the winner to give them the bragging rights over Lancashire rivals Wigan Athletic at Bloomfield in Saturday’s early kick-off.  Wigan winger James McClean was sent off late on to add insult to injury.

Conor Sammon came off the bench to score a late winner as Derby County secured an impressive 3-2 win at Watford.

Jamie Ward twice put Derby in front only for Fernando Forestieri and Lewis McGugan to peg them back, but Sammon struck two minutes from time to lift in-form Derby up to eighth.

Reading replaced Watford in the top six after a 4-1 home win over Doncaster Rovers and the Royals are now unbeaten in eight games.

Yeovil remain bottom of the table but they held Brighton and Hove Albion to a goalless draw, while Barnsley secured a much-needed 3-2 win over Middlesbrough.