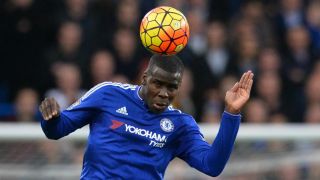 Kurt Zouma has stressed it is impossible for Chelsea to win each game and feels they have been unlucky so far this campaign.

Guus Hiddink's men sit 14th in the Premier League table ahead of Sunday's encounter with Arsenal following an underwhelming start to the season, but Zouma believes they are on the right path again.

"Mentally when you play football you always want to win but you have to accept that sometimes you can't," Zouma told the official Chelsea website.

"You can be unlucky and I think we have been at times since the beginning of the season even if we haven't played as well as we did last year.

"The spirit in the group is very good and we are all determined to do better than we did in the first half of the season. We have been playing better for a few weeks now."

Zouma has been an important first-team member in 2015-16 and the Frenchman is happy with the chances he has had over the past few months.

"We have a big team with big players and big personalities in the dressing room. It helps us young guys when we’re around them," he added.

"The team is always together and that's a good thing. I'm proud and happy because I have had a lot of chances to play but like the whole team I have to keep improving.

"The most important thing is that we have to win points; it doesn't matter who is playing at any given moment."