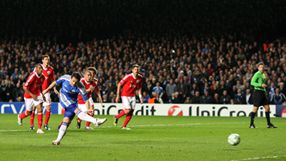 Chelsea, who looked second best for long periods, went through to their sixth semi in the last nine seasons after winning 2-1 in the second leg and 3-1 on aggregate but they were close to losing the tie on away goals in the closing stages.

Instead the Londoners made it safe in stoppage time through a thunderbolt from Portuguese Raul Meireles, heckled in the first leg at Benfica last week for his previous Porto connections.

Chelsea took the lead with a Frank Lampard penalty after 21 minutes and had the chance to take a firm grip on the game when Benfica skipper Maxi Pereira was shown a second yellow card for a rash challenge on John Obi Mikel five minutes before halftime.

But instead Chelsea allowed Benfica to take the initiative for much of the second half and although the Premier League side did have chances, it was the visitors who got the important second goal when Javi Garcia headed home on 85 minutes.

That made the aggregate score 2-1 to Chelsea but another goal for Benfica would have brought them level at 2-2 and they would have qualified instead.

Substitute Nelson Oliveira and Pablo Aimar both went close to getting the goal that would have eliminated Chelsea but in the last significant action of the game, Chelsea broke.

Substitute Meireles ran unchallenged for almost 70 metres before smashing the ball past Artur to seal Chelsea's place in the last four as they seek a first ever European Cup title.

Benfica coach Jorge Jesus told reporters: "We've been the best team in Lisbon and London and even though we played most of the match with 10 men tonight, we made Chelsea look ordinary.

"We pushed them back into the final third and after coming back to 1-1 we nearly scored with a couple of really good chances, but in the end suffered on the last counter-attack and were finally beaten.

"But we go out as the better team with our heads held high. Of course it is frustrating to lose but we weren't helped by some poor referring decisions either."

Benfica had 22 goal attempts with eight of them on target compared to Chelsea's 15 with four on target and if they had grabbed a second in the dying minutes, the hosts would only have had themselves to blame for not wrapping up the victory earlier.

Chelsea's interim coach Roberto Di Matteo - whose odds of earning the permanent job get shorter every day - knew his side were slightly fortunate but also knows Champions League glory is all that really matters to owner Roman Abramovich.

"We expected a hard game and we made it a little more difficult for ourselves by not scoring the second goal from all our chances in the second half," the Italian said.

"We did not keep possession enough with the extra man and we were not as sparkling as we could have been. But we are pleased we won the game to go through and over the two legs I think we were the better side and deserved to win it."

Benfica started - and finished - as the brighter, more attacking, more cohesive side but Chelsea went ahead when Lampard scored a penalty after Garcia clattered into Ashley Cole.

Lampard converted even though Artur got a hand to the ball.

Benfica were then reduced to 10 men after Pereira recklessly picked up a second booking but the Portuguese responded strongly after the break with Aimar forcing Petr Cech into one of a number of fine saves.

"Cech was their best player, that says a lot," said Jesus.

Chelsea did defend well especially when their skipper John Terry, who went off after an hour as a precaution after taking a knock, cleared a shot from Oscar Cardozo off the line in the first h