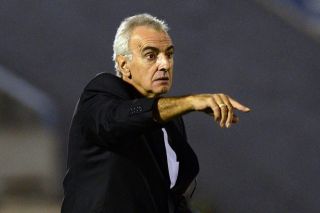 Jorge Fossati's Penarol were comfortable 6-0 winners on aggregate after routing Wilstermann 4-0 in Bolivia on Thursday.

Diogo Bittencourt got the ball rolling for the Uruguayan visitors in the second leg at the Estadio Felix Capriles, opening the scoring in the 23rd minute.

Penarol ran riot in the second half, with back-to-back penalties from Jonathan Rodriguez and substitute Juan Olivera in the space of nine minutes.

Cesar Vallejo surrendered a two-goal lead to draw 2-2 against Millonarios but still booked their spot in the next round.

A first-half brace from Ronald Quinteros had the Peruvian hosts in cruise control before Fernando Uribe and Jonathan Agudelo hit back for Millonarios.

But Colombia's Millonarios failed to add to their score as Cesar Vallejo triumphed 4-3 on aggregate.

Deportivo Cali, Caracas and Deportivo Capiata were the other teams to advance from the first round on Thursday.

Cristian Nasuti scored twice, while Carlos Rivas netted a goal of his own as Colombian side Deportivo Cali downed UTC Cajamarca of Peru 3-0 on aggregate after the first leg ended goalless.

Uruguay's Danubio crashed out of the competition 5-3 on aggregate following Thursday's 2-2 draw at home to Deportivo Capiata of Paraguay.

Sao Paulo striker Alexandre Pato cancelled out Silvinho's opener, only for Criciuma to hit back through Lucca two minutes before the half-time break.

Vitoria will return home with a slender lead after defeating Sport Recife 1-0 on the road.