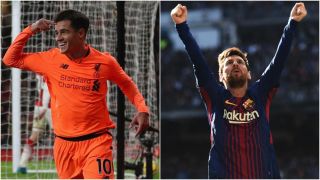 Brazil international Coutinho finally sealed his transfer to Barca from Liverpool on Saturday for a reported club-record fee that could rise to as much as €160million.

Messi signed his latest contract in November that will keep him at the club until the end of the 2020-21 season, after which he has been tipped to move back to Argentina, most likely to join boyhood club Newell's Old Boys.

Laudrup, who spent five years at Camp Nou, expects Coutinho to be under pressure to perform given his price, but feels he could become part of an overhaul of the team so they can cope when Messi calls time on his career in Europe.

"With this price tag on his shoulders, there will be huge expectations," he told Omnisport. "When you talk about Barcelona, first of all, you think about Lionel Messi. But he needs great players.

"In recent years, Barcelona have lost some important players: Xavi Hernandez, Neymar and others, like [Carles] Puyol. So they need to build on this, even if they are top now, because there will be one day when Messi is not there.

"The only way you can do that, knowing you cannot find a new Messi, is to try to get three, four, five very good players to fill the gap that he will leave."

With Dembele now back from a hamstring injury, it has been suggested Coutinho will likely play in a central midfield position with a view to taking over from 33-year-old Andres Iniesta.

But Laudrup, who won four LaLiga titles and the 1992 European Cup among a host of honours for Barca, does not believe the 25-year-old is an ideal fit for a deeper position.

"I have a doubt that he can replace Iniesta because he is more offensive than Iniesta," he said. "On the other hand, Iniesta was offensive when started and down the years he became more of a midfielder. I see him more in the position of Neymar.

"He's a very good player and he'll fit into the Barcelona way."

Coutinho's deal makes him the third most expensive player in history, behind Neymar and Kylian Mbappe, who will cost PSG €180m when he makes his loan move from Monaco permanent at the end of the season.

It also comes just a week after Liverpool made Virgil van Dijk the most expensive defender in the world when they signed him from Southampton for a reported fee of €84m.

"The amounts have just gone sky high in the last few years. I think we all ask ourselves: 'where will it end?'"