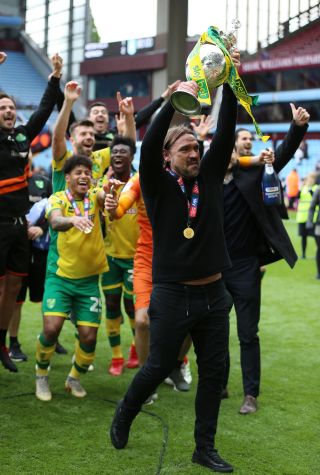 Norwich made the perfect start when Teemu Pukki opened the scoring after seven minutes with his 30th goal of the season.

The visitors had already secured promotion to the Premier League before the game but the victory at Villa Park saw them go up as champions.

Farke said: “To win the title is the icing on the cake.

“It fits our season to win the title at Villa Park against a side that was on fire before.

“To be able to lift the trophy at this amazing ground is a fantastic feeling.

“It is a proud moment for the club as each and every player worked so hard for this ending.

“These moments don’t come that often and we will never forget this moment. To finish the season with 14 games unbeaten is outstanding. To win the title with 94 points and with almost 100 goals can make us very proud.

“We created something excellent. The consistency was remarkable. It is a proud moment to work for this amazing club.

“We know that we are probably three or four years ahead of schedule to build something for this club but we will take it.”

Farke is aware of the challenge his side now face and added: “Stuart Webber (Norwich’s sporting director) said we have climbed Mount Everest and now we have to try and climb it again.”

Villa hope to follow Norwich into the Premier League as they now prepare for a play-off semi-final against West Brom.

Manager Dean Smith said: “We are going into two games that we are all looking forward to.

“There is an awful lot of confidence. You can feel it around Villa Park. The players will relish the games. This place will be rocking and that can give us a goal start.

“We lost to them here 2-0 this season but we weren’t at the top of our game and never had a full squad.”

Smith felt that the defeat against Norwich was tough to take. He added: “I thought it was a good performance. It certainly wasn’t deserving of getting beat.

“They started better than we did and the equaliser got us going. We stepped it up, finished the first half the better team, but probably didn’t make the most of our opportunities.

“The pleasing thing was that we got through injury-free as I need as many fresh players with minutes in their legs for the play-offs.”

Meanwhile, Smith revealed reports Jack Grealish has a £60m release clause in his contract were news to him and he said: “If it was me it would probably be more.”