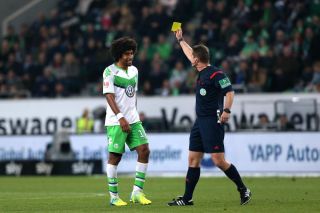 Wolfsburg defender Dante is confident the club can improve next season following a disappointing 2015-16 campaign.

Dieter Hecking's men had been touted as potential Bundesliga title rivals for Bayern Munich and Borussia Dortmund after finishing second and lifting the DFB-Pokal in 2015.

However, the Lower Saxony side dropped to eighth after securing only 12 wins in 34 league games and, although they did reach the last eight of the Champions League, they squandered a two-goal first-leg lead against Real Madrid and were eliminated.

"In the end, we only finished eighth," said Dante. "That's obviously disappointing because originally we'd set our sights on a place in Europe.

"We wanted to be Bayern's nearest challengers again and we didn't get near that.

"Now we just have to draw the necessary conclusions from this season and make sure we're able to meet our objectives next term."

Discussing his own performance in his first season with the club, Dante added: "Much like the team, I had good spells, but also moments where I didn't fulfil expectations. I'm well aware of that.

"First and foremost, that was down to having to get used to new surroundings, but I also lacked consistency.

"I hope I'll do better next season."