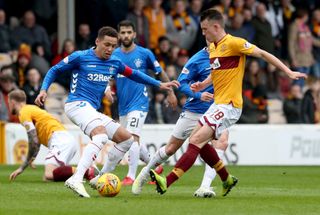 Motherwell edged a 3-2 victory against Livingston in a crazy final game of the Ladbrokes Premiership season illuminated by one of the most exciting talents Scotland has produced in years.

David Turnbull collected the Scottish Football Writers Young Player of the Year award earlier in the week and he demonstrated just why with another outstanding individual performance.

Whilst the game was relatively meaningless in the context of the season, both sides started with a high intensity that resulted in Livi creating two chances within the opening 10 minutes.

Ryan Hardie breached the Motherwell defence before laying off for strike partner Lee Miller to fire tamely at the goalkeeper before captain Alan Lithgow’s header from Craig Sibbald’s corner was comfortably held by Mark Gillespie.

But it was Motherwell who took the lead when Turnbull’s brilliant free-kick after 10 minutes was glanced home by Liam Donnelly, who came into the side after Carl McHugh was replaced during the warm-up.

Motherwell doubled their advantage through an inspired corner routine straight off the training ground on 22 minutes. Gboly Ariyibi rolled a short corner to Liam Scott who expertly dummied the ball, fooling two defenders and Turnbull had all the time in the world to smash past Ross Stewart.

Within minutes Motherwell had an opportunity to extend their lead when David Munro pointed to the spot after Ariyibi was felled by Sibbald.

Turnbull confidently stepped up and fired straight down the middle to score his 15th goal of the season.

An enthralling game descended into chaos when referee Munro awarded two penalties within a minute.

After Tom Aldred was adjudged to have fouled Ricki Lamie, Livi had a golden opportunity to reduced the deficit but the impressive Hardie’s penalty was clawed away by Gillespie.

Motherwell raced up the other end and were awarded a penalty of their own as goalkeeper Stewart dragged down Turnbull.

The Scotland under-21 international stepped up but he was denied his hat-trick as Stewart redeemed himself with a low save.

Livi demonstrated the fighting qualities that has encapsulated their season as they almost produced a stunning comeback.

Substitue Scott Tiffoney was the the catalyst for a stirring late performance.

The diminutive forward poked home at the back post to pull a goal back on 81 minutes.

Tiffoney then gave the travelling support real hope three minutes later when he breached the Motherwell defence and fired past Gillespie to further reduce the deficit.

The visitors surged forward looking for an equaliser but ultimately came up short despite a Dolly Menga effort narrowly flying past the post.