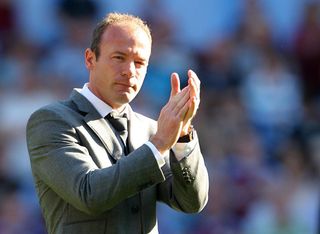 Alan Shearer put his reputation on the line when he accepted the task of attempting to drag Newcastle out of the relegation tailspin into which they had plunged as the 2008-09 season drew to a close.

The Magpies’ home-grown record goalscorer stepped into the breach on April 1, 2009 with eight games of the Premier League campaign remaining after Joe Kinnear’s brief reign had been ended by heart surgery.

April 1: After a day of frenzied speculation, Newcastle, who lie in 18th place and two points from safety, finally confirm Shearer’s short-term appointment at around 10pm.

April 2: At his first press conference, the former Newcastle and England captain, who will be assisted by former Southampton team-mate Iain Dowie, warns fans: “We’ve got a massive fight on our hands”.

April 4: Second half goals from Frank Lampard and Florent Malouda condemn the new manager to a 2-0 defeat at St James’ Park in his first game as Chelsea maintain their title challenge.

April 7: Shearer holds an open training session in front of 7,500 fans at St James Park and reprises his famous goal celebration after scoring in a small-sided game.

April 11: A late header from 20-year-old substitute Andy Carroll hands Shearer his first point after a 1-1 draw at Stoke.

April 19: Darren Bent’s first-half strike at White Hart Lane leaves Shearer without a win in his first three games and just three more in which to rescue the club. He later admits they will have to beat Portsmouth, Middlesbrough and Fulham on Tyneside to escape.

April 23: Shearer defends former England team-mate Michael Owen, who is without a goal since January 10. He said: “We know if we do create chances, Michael will be there and Michael will score goals.” Owen does not score in his final four appearances for the club.

April 27: Owen is denied a winner by Portsmouth keeper David James as the Magpies can only muster a 0-0 draw at St James’.

May 3: The ex-TV pundit is mocked by Liverpool supporters, who sing, “You should have stayed on the telly” as Yossi Benayoun, Dirk Kuyt and Lucas Leiva score in a 3-0 win at Anfield after Owen is left out. Midfielder Joey Barton is sent off for a rash challenge on Xabi Alonso, earning himself a three-match ban, a dressing down from his manager and a club suspension.

May 11: Steven Taylor and substitutes Peter Lovenkrands and Obafemi Martins score as the Magpies come from behind to beat fellow relegation candidates Middlesbrough 3-1 and climb out of the bottom three.

May 16: Newcastle’s fate is taken out of their own hands following a 1-0 home defeat by Fulham during which Mark Viduka sees an ‘equaliser’ controversially disallowed and Sebastien Bassong is sent off.

May 24: Damien Duff’s own goal confirms relegation courtesy of a 1-0 final-day defeat at Aston Villa, prompting Shearer to claim “big changes” need to be made at the club.

May 25: Managing director Derek Llambias reveals he and owner Mike Ashley will sit down with Shearer to discuss the way forward.

May 26: Confirming talks with Shearer are ongoing, Ashley insists his move to appoint him was “the best decision I have made.”

June 8: As the club’s 206-goal marksman awaits an answer over his blueprint, Newcastle confirm the club has been put up for sale with an asking price of £100million.

July 15: The Magpies deny reports that Joe Kinnear is to return as manager.

August 8: Caretaker Chris Hughton leads the club into a 1-1 opening day draw a West Brom and is appointed permanently two and a half months later. Almost 12 years on, Shearer has still not had his answer.