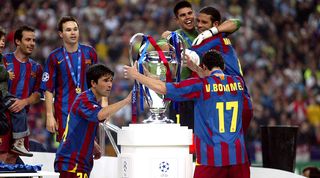 With just over 20 minutes of the game remaining, Arsenal were 1-0 up through Sol Campbell’s first-half header, despite having gone down to 10 men after just 18 minutes when Jens Lehmann upended Samuel Eto’o.

Arsene Wenger’s side rode a wave of pressure after half-time but could have doubled their advantage late on when Henry bore down on goal – only to see his effort saved by Barça keeper Valdes.

It proved decisive: Eto’o tucked away an equaliser in the 76th minute, before full-back Juliano Belletti pounced to win the game 10 minutes from time. Ex-Blaugrana midfielder Deco – also a winner with Porto in 2004 – recalls the moment in the latest FourFourTwo Films production, How to win the Champions League by the men who have done it.

“The game had three phases,” the ex-Portugal man told FourFourTwo. “In the beginning, when we had one more player, we were controlling the game and it looked like it was going to be easy.

“I even think that the referee erred – he should have applied the advantage rule and let us score the goal [when Lehmann fouled Eto’o], making it 1-0. But they ended up scoring from a free-kick and the game was a lot more complicated because they retreated and started to play on the counter-attack.

“But for me, the decisive moment of that final was when Henry was face-to-face with Valdés after a counter. Victor made a spectacular save, nearly impossible.

Barcelona players since have praised the tactical changes made by manager Frank Rijkaard at half-time in Paris – and Deco agrees that his boss's actions helped change the game too.

“Frank was a lot more tranquil than us – he always was,” recalled the former midfielder. “We had to do everything as we always did; it was just another game, he said. So, he had that ability to tranquillize.

“Logically, besides being a great manager he was one of the best players ever. He had already won the competition and that gave him a little advantage against the others.

“At half-time he was quite calm. He made some changes, and ended up putting Belletti in, which was a surprise, so that he could get forwards. Then [Henrik] Larsson, so that we had a little bit more strength in the attack – and he did very well. Then [Andres] Iniesta went in too.

“The risk was that they could score on a counter-attack because they had fast and dangerous players. So, the conversation was mostly about that, trying to attack and score but still being cautious in the defence. But we started to believe we would score, and Belletti ended up getting the goal.”