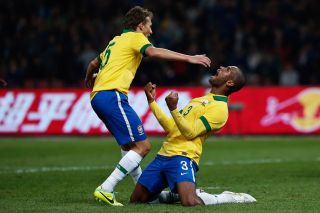 The Cruzeiro defender got on the scoresheet after 66 minutes, heading home a Neymar free-kick to double Brazil's lead after Oscar's goal seven minutes earlier.

The 25-year-old admitted that "it was a dream" to finally score his first goal for Brazil and targeted further appearances under Luiz Felipe Scolari.

"I am very happy to score my first goal with the national team shirt," he said.

"I had it in my head that this game was the biggest game of my life. To be part of the Selecao means a lot to a player. Moreover, the World Cup is fast-approaching. I am fully focused and very thankful for being here.

"I think I had a pretty solid game and even scored a goal. If I manage to keep it up then I think I can reach my goals. I'm relieved but I have to keep working every day in order to stay in the group."

Brazil have won 10 of their last 11 games in all competitions, with Scolari praising the development of his team.

"I think if we were to observe the results and progress of the team, it was a great year," he said.

"After those initial games where we were in search of tactical evolution and finding the parts to make this work, we had it all."

Scolari also hinted that there could be surprise inclusions in the squads for his next two friendlies prior to the FIFA World Cup, depending on players' club commitments in Brazil.

"Maybe I have to call one or another name that I have not imagined yet," he said. "I'll probably call one or two players who are not here."