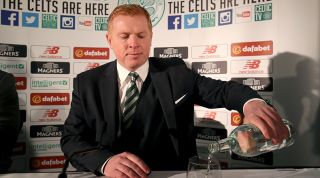 Neil Lennon wants no comparisons made with Brendan Rodgers after taking over from his fellow Northern Irishman at Celtic.

The former Hoops captain and manager is back in charge of the Parkhead club for the rest of the season following Rodgers’ sudden departure for Leicester on Tuesday.

The ex-Liverpool boss garnered an unprecedented domestic double treble in his first two seasons at Celtic and, with the club eight points clear at the top of the Ladbrokes Premiership, the Betfred Cup already in the trophy room and a William Hill Scottish Cup quarter-final at Hibernian on Saturday, they are poised for a remarkable third.

Lennon won three league titles and two Scottish Cups in four years in a previous stint in the Hoops’ hot seat between 2010 and 2014.

He said: “It will take time for me to adapt and the players to adapt to life without Brendan.

“Tactically you learn the game as you go along. I don’t have all the answers and certainly I don’t want to be compared to Brendan.

“I know some people will do that as we go along.

“But Brendan has his way and it has been fantastic and I have my way. I am still always learning.

Neil Lennon quote ‘I have big shoes to fill’ the Lenny I know will fill them with his eyes shut — John Hartson (@JohnHartson10) February 27, 2019

“In fact, when I went to Lennoxtown (training ground) yesterday I was learning new stuff, the implementation of the stuff that Brendan has left there I haven’t seen before.

“The most important thing is the club. They’ve lost a manager who will go down as one of the greats. I’ve got big shoes to fill.

“The team’s been unbelievable under Brendan, seven trophies in a row, top of the league at the minute and the quarter-final of the Scottish Cup.

“When I took over the last time the club was in a very different position.”

Rodgers’ decision to walk away from Celtic at this stage of the season shocked the Hoops support, many of whom instantly turned on their former hero.

However, Lennon, who left Hibs in January, had some empathy.

“I was surprised, maybe because of the timing, that was all,” said the former Leicester midfielder.

“From a professional point of view I can maybe understand it, to a certain extent.

“He has his ambitions, the Premier League is seen by many to be the top league in the world and he is going to a very good club that I know very well.

“As he goes, an opportunity has come up for me and I want to take it with both hands.

“It was a no-brainer, I’m very grateful to be here. The board have put their faith in me to see out the season.”

Lennon insists he has mellowed since his first spell as manager at Parkhead, but stressed that the desire to win has not diminished.

He said: “I’m not as volatile I don’t think. I wanted to take on the world when I first took over.

“But in terms of my behaviour, I will obviously monitor that as best I can.

“It is maturity and experience and especially here, with the run-in, you don’t want to be sitting in the stand.”